The magic of Daguerreotype Photography

Discover the history and art of Daguerreotypes, the first publicly available photographic process. Invented in the early 19th century by Louis Daguerre, Daguerreotypes were popular until the mid-1850s and produced stunningly detailed images. Learn more about the technical aspects of this fascinating process and view examples of beautiful Daguerreotypes. 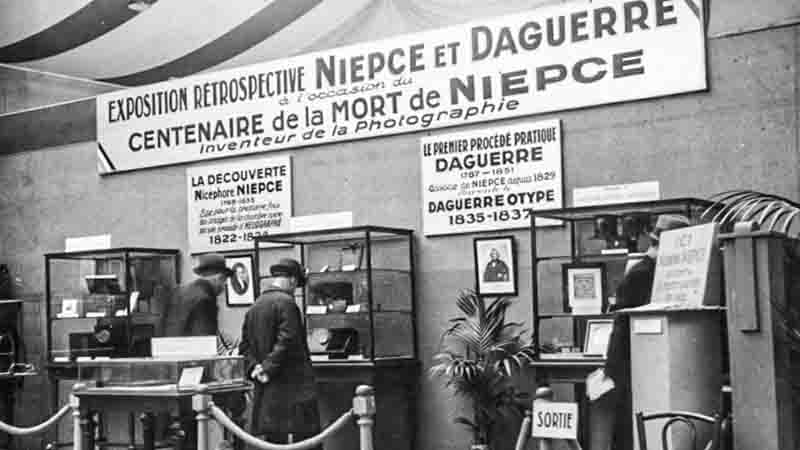 Visitors to the Niepse and Daguerre exhibition

Louis Daguerre and Nicéphore Niépce were two French inventors who worked together to develop the first publicly available photographic process.

Daguerreotypes were the first photographic process available to the public. Introduced in the early 19th century by Louis Daguerre, daguerreotypes were very popular until the mid-1850s and provided stunningly detailed images.

The history and artistic beauty of Daguerreotypes

On August 19th 1839, mankind was given an amazing gift. This invention and most extraordinary triumph of modern science were to have a fundamental impact on everyone's life from that day on.

News of its discovery spread like wildfire across the globe.

The dream of science to use light to replicate the world around us had come true.

It was now possible to precisely and authentically record both the appearance and the environment of man.

The daguerreotype process was not the birth of photography, but the first practicable method of obtaining permanent images with a camera.

The release of the miracle formula of photography by the Royal Society permitted the further development of one of the greatest technological breakthroughs of all time.

The Frenchman Louis Daguerre had succeeded. His name would be synonymous with the invention of photography for many decades to come.

The Daguerreotype technology was a groundbreaking accomplishment.

The pioneering work of Louis Daguerre

Although the principle of the camera was known in antiquity, the actual chemistry needed to register an image was not available until the nineteenth century.

Numerous pioneers of photography and creative craftsmen and scientists had tried their hand at creating permanent images through the action of light.

Each of them contributed with their discoveries to the success of permanently fixing an image.

Silver nitrate and silver salts, iodine, bromide and chlorine were the essential ingredients and light-sensitive chemicals discovered by individual researchers and scientists.

In the 16th century Italian doctor and early iatrochemist Angelo Sala experimented with silver nitrate and silver salts that were to become an essential step towards the invention of the photographic process.

Thomas Wedgwood is the first person known to have thought of creating permanent pictures by capturing camera images on materials coated with a light-sensitive chemicals.

It was not until the invention of a light-sensitive surface by Frenchman Joseph Nicéphore Niépce that the basic principle of photography was born.

The first photo was taken by Nicéphore Niépce in 1826.

It allowed up to 350 people to view hand-painted landscapes and architectural views, presented through a large translucent screen with lighting effects and immersive perspective.

Looking for a way to incorporate mechanically produced images into his diorama system he experimented with preserving images in his camera obscura.

Through a business partner, Daguerre was introduced to Nicéphore Niépce, who initially reacted to him hesitantly and with a certain amount of suspicion.

Nicéphore Niépce, however, needed funding for his heliograph project and saw potential in Daguerre's reputation and popularity.

Daguerre had the necessary resources, access to prominent figures, and acceptance in the Parisian and European art scene.

The complementary expertise of the two men would lead to an official partnership in 1829.

Collectively, they sought to find a way to capture, reproduce and preserve light efficiently and faithfully.

They worked separately, but in conjunction with one another, sending coded letters back and forth discussing their research.

By 1832, the pair had invented a new photographic medium: the “physautotype”.

After the sudden death of Nicéphore Niépce in 1833, his son Isidore succeeded him in the company.

After years of experimentation, he discovered that iodine-silver photographic plates treated with mercury vapour rendered the positive in much shorter exposure times.

The birth of modern photography

In 1837, Daguerre developed a method of fixing the photograph with common salt to make the exposure permanent and prevent further deterioration of the original when viewing in light.

After numerous attempts, he had found a way to produce pictures in a relatively short time and to fix them successfully.

Daguerre underwent further optimisation when he followed a suggestion by astronomer and chemist Sir John Herschel to use sodium hyposulfate instead of salt,

This method created strikingly detailed images on a sheet of copper plated with a thin coat of silver.

The daguerreotype, a direct-positive process, was not reproducible, each photo that was taken was unique.

Daguerre imposed that the name of the Niépce- Daguerre company was changed to “Company under the trademarkDaguerre and Isidore Niépce to exploit the discovery invented by Daguerre and the late Nicéphore Niépce”.

The first modern photographic technique became Daguerre’s with the name Niépce pushed into the background.

After little luck working out a means of selling his invention by subscription, Daguerre approached François Dominique Arago, the perpetual secretary of the French Academy of Sciences.

On January 7, 1839, Arago lectured on Daguerre’s process at a meeting of the Academy.

At the instigation of Arago of Arago, the French government awarded Daguerre an annual pension of 6,000 and Isedore Niépce 4,000 francs to share the invention with the world.

The Daguerreotype process complete, replicable and ready for use, was announced and the method was offered freely without restrictions to the world, with the exception of England and Wales.

No agreement could be reached with the British government on payment for Daguerre, so the production method was trademarked and protected there.

Masterpieces of light and shadow

Daguerre wrote a booklet describing the process, “A Historical and Descriptive Account of the Various Processes of the Daguerreotype and the Diorama”, which became a best seller; 29 editions and translations appeared before the end of 1839.

It is due to his exceptional skill and personality that photography was approved as being valuable by the Society de Science and eventually granted as “a gift to the whole world” by the French government.

Louis Daguerre, who was neither a chemist nor a scientist but a businessman and showman, had the perseverance and the right instinct.

He had managed to excite the world not only with curiosity but also with enthusiasm for photography.

The craze was incredible. Numerous portrait studio’s opened their doors from 1840 onward. Everybody wanted to be daguerreotyped.

This was the so-called Daguerreotypo-mania that spread to Europe and especially in the USA.

Even though the portrait was the most popular subject, the daguerreotype was used to record many other images such as topographic and documentary subjects, antiquities, still lifes, natural phenomena and remarkable events.

Louis Daguerre by now was famous all over the world. He became a French Legion of Honour awardee, and in the same year, was made Honorary Academician at the National Academy of Design.

Once the daguerreotype’s process was publicly known, optical and chemical refinements were made that alleviated certain problems.

The process of washing a gold chloride solution over the image to reduce the black and white tones and to deliver a warmer amber tone as well as gilding further refined the daguerreotype process.

The British chemist J.F. Goddard published the benefits of adding bromine to the iodine used during the sensitisation process, boosting the speed of the plates.

In 1840, the Hungarian mathematician Joseph Petzval created a lens with an f 3 point 6 aperture, that was much faster than Chevalier’s lens that Daguerre had used.

Combined, both advances reduced exposure time to about a minute.

Despite Daguerre's powers of persuasion, the French Academy of Fine Arts did not accept photography into its Salons.

The timeless art of Daguerreotype photography

Daguerre’s wrote on the daguerreotype: “The daguerreotype is not merely an instrument which serves to draw Nature; on the contrary, it is a chemical and physical process which gives her the power to reproduce herself.”

The notion that photography provides access to an unmediated view of the world sparked intense debate over the artistic merits of the new visual form.

As “Daguerreotypo-mania” swept the globe, the art world struggled to reach a consensus on how to receive Daguerre’s invention.

Can photography be art

French poet and critic Charles Baudelaire remarked on the medium:

“As the photographic industry became the refuge of all failed painters with too little talent, or too lazy to complete their studies, this universal craze not only assumed the air of blind and imbecile infatuation but took on the aspect of revenge. Can it legitimately be supposed that a people whose eyes get used to accepting the results of material science as products of the beautiful will not, within a given time, have singularly diminished their capacity for judging and feeling those things that are most ethereal and immaterial?”

The legacy of the daguerreotype process

Despite Baudelaire's fears that the medium would disrupt the transcendent experience he attributed to art, it were primarily the daguerreotype's documentary capabilities that made it so popular.

Daguerre spent his retirement in the small village of Bry-sur-Marne, painting diorama tableaux for local churches.

It’s estimated that 30 million daguerreotypes were created in the United States alone.

The distinctive aesthetic of this 19th-century photographic technique has survived to this day, and the daguerreotype process continues to be used by specialists and professionals.