Impression of Ireland and the Irish

The series originates from the lucky circumstances, that German Photo Reporter Peter Bock-Schroeder accompanied his friend and muse, fashion designer Vera Maxwell on a business trip to Ireland. 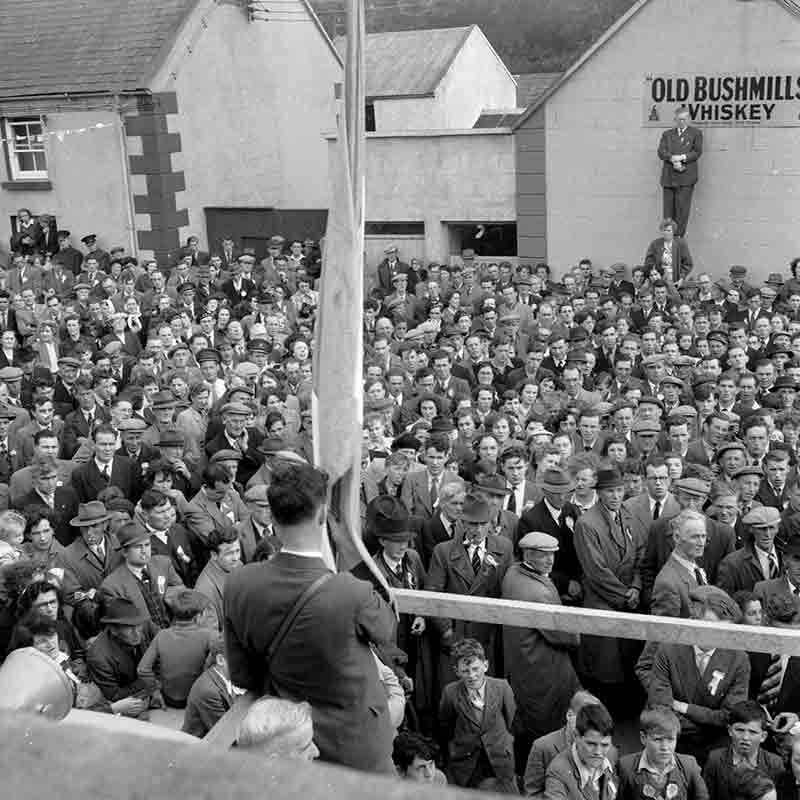 Peter Bock Schroeder had just completed a one-year journey through the former USSR, becoming the first West-German reporter to cover the life behind the Iron Curtain. In a few months he would be in the Middle East to report about the war events and the Suez crisis from Israel and Egypt.

But now time seemed to stand still. He could record what he saw, without having to follow the agendas of the editors of magazines and newspapers. There was no pressure at all. 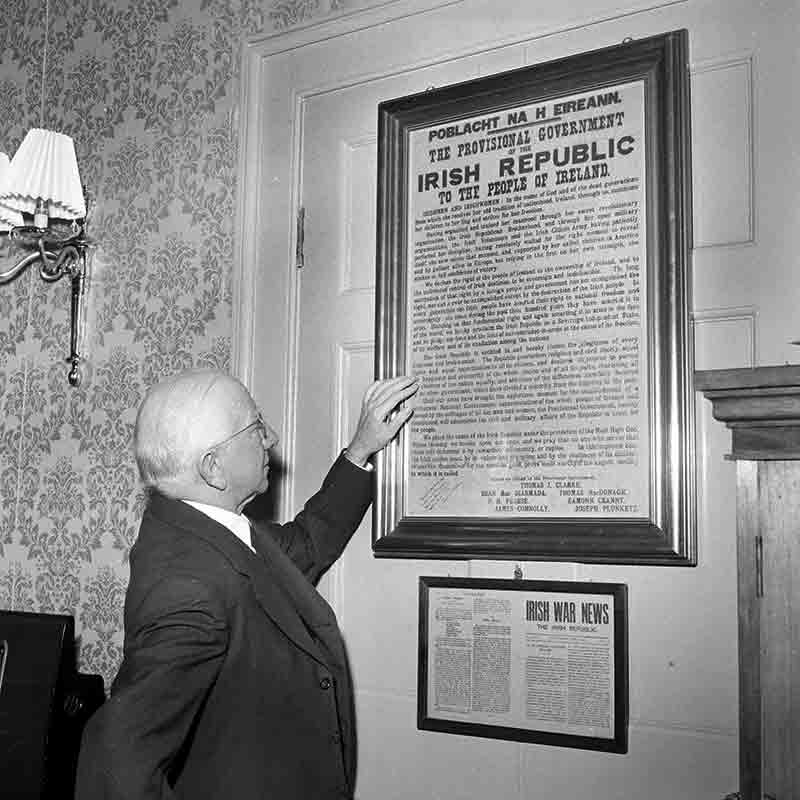 When Peter Bock-Schroeder was invited to dinner with President Kelly, he learned that the history of the Irish was marked by the fight for freedom and independence.

The following day, the Irish head of state invited him to his office to have a photograph taken while showing him his personal copy of the Proclamation of the Republic.

Full copies of the Easter Proclamation are now treated as a revered Irish national icon. Other copies are on display in the GPO (headquarters of the Rising and the place where the Proclamation was first read), the National Museum of Ireland, the Trinity College Library's Long Room and other museums worldwide.

President Kelly's copy is currently on permanent display in the main foyer of the Irish parliament building. 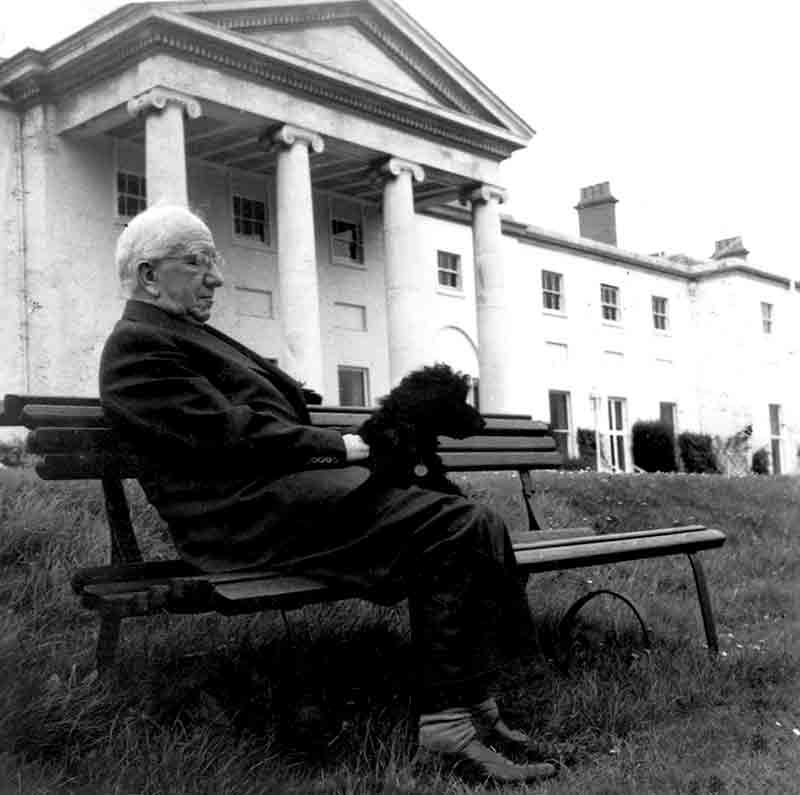 Seán T. Ó Ceallaigh was born on 25 August, 1882, he was one of the founders of Sinn Féin and launched and edited the “Nation”, a weekly review. From 1906 – 24 he was an Alderman of Dublin Corporation. 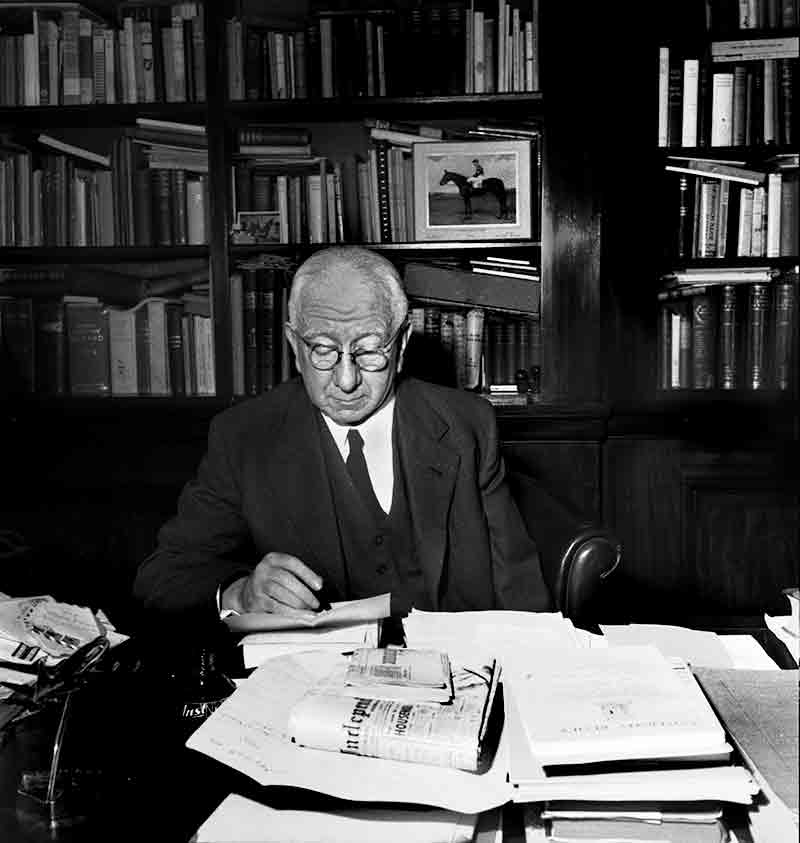 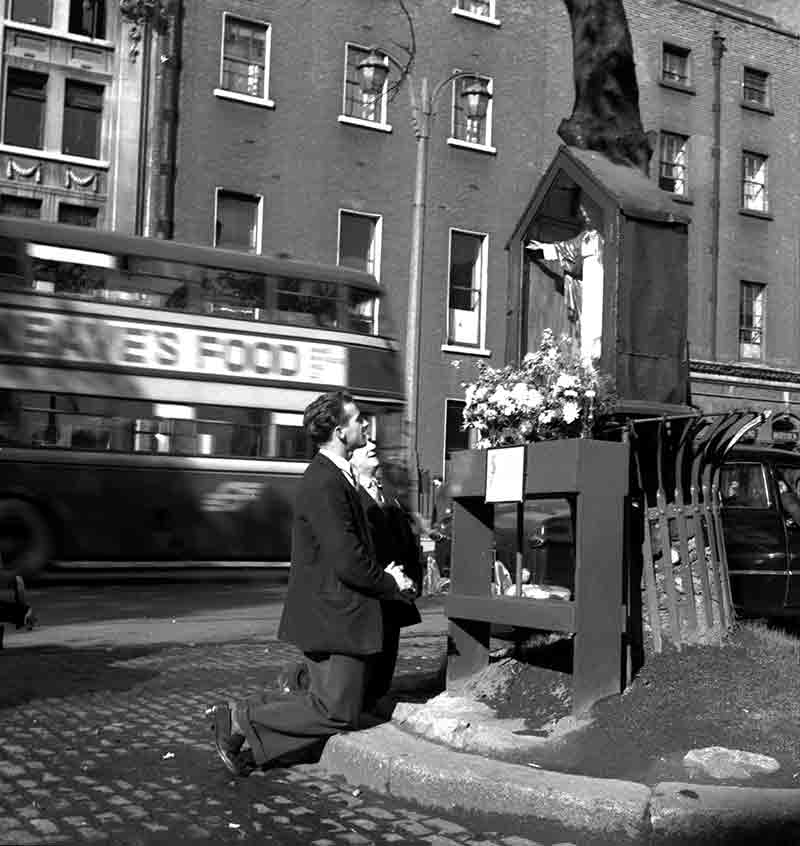 For photojournalist Bock-Schroeder Maxwell's contacts were a unique opportunity to get to know and photograph the establishment of Ireland. But equally important to him was to photograph ordinary people.

For several days he walked through Dublin and documented the everyday life of the Irish capital. Playing children, praying people and the famed Irish pubs. 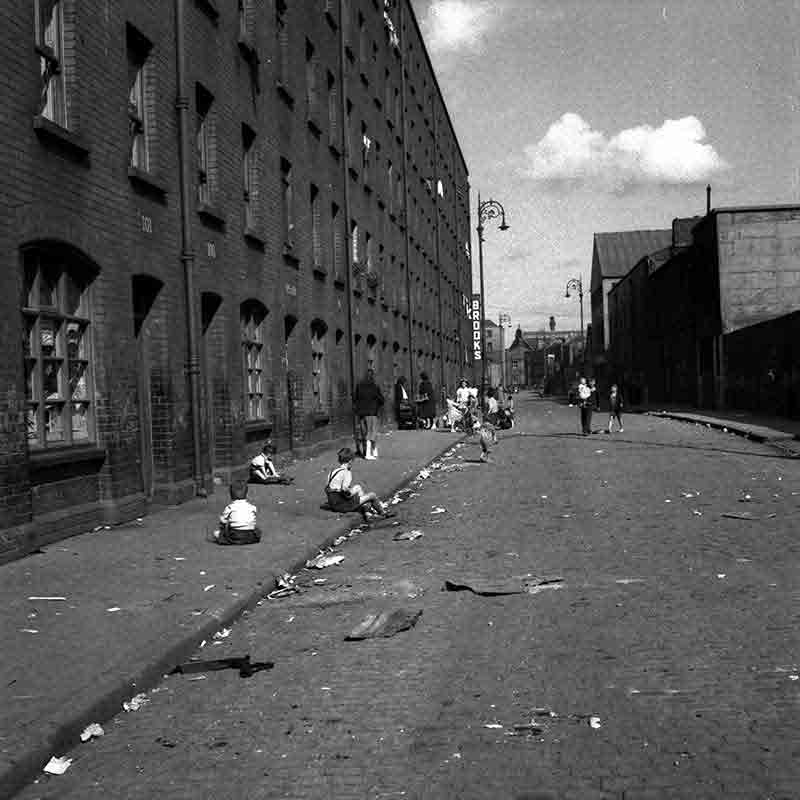 In Ireland in the 1950s things looked rather bleak - more and more people emigrated in search of work. The population of the Republic fell to an absolute low of 2.8 million people. Things looked particularly bleak for women: They basically earned less than men, and if they were married, they were not allowed to do many jobs at all.

In the 1950s, many books and films were also censored in the Catholic Republic because they contained too much violence, sex or the "wrong" ideas. 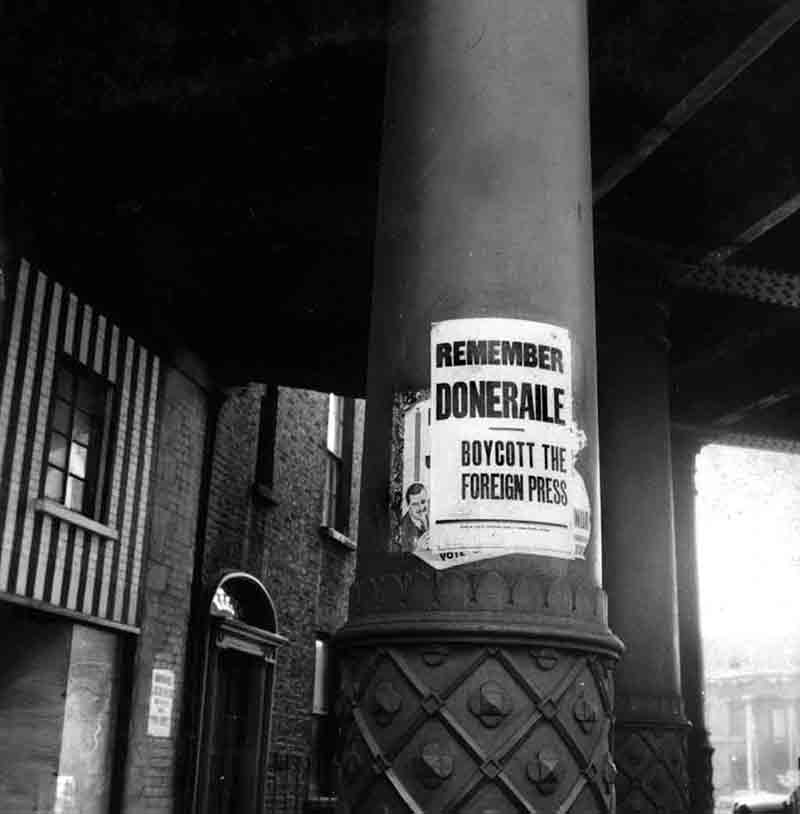 Doneraile achieved note in 1954 when a British journalist, Honor Tracy, condemned the local priest Canon Maurice O'Connell for spending the then exorbitant amount of £9000 on his parochial house while there was so much poverty in the village. 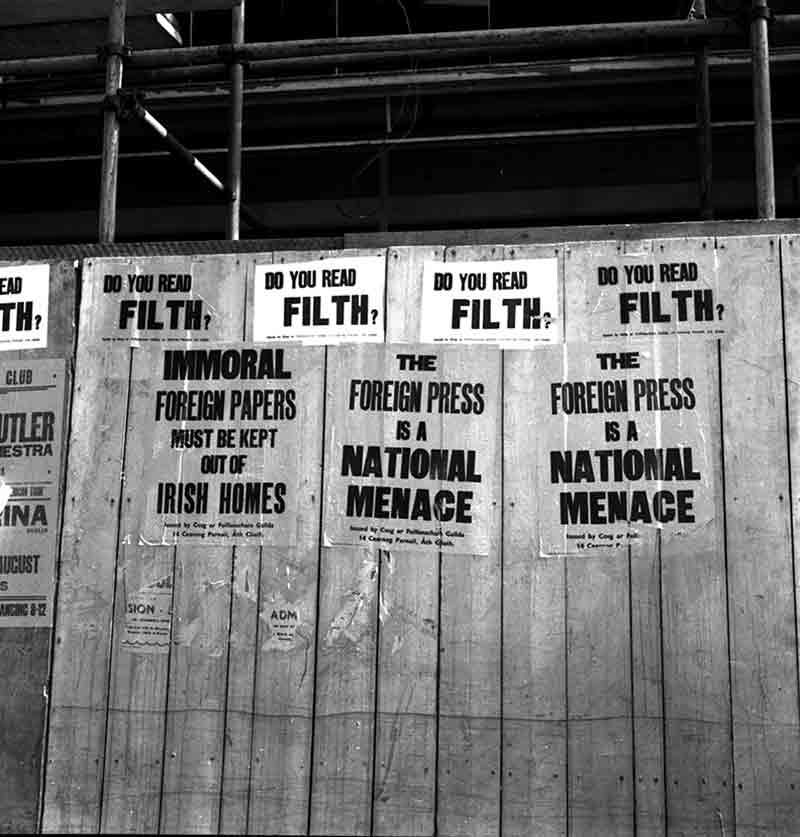 Following The Sunday Times' apology to O'Connell, Tracy sued it and was awarded £3000 in compensation. In response some 3000 of Doneraile's parishioners marched in the village in support of Canon O'Connell. 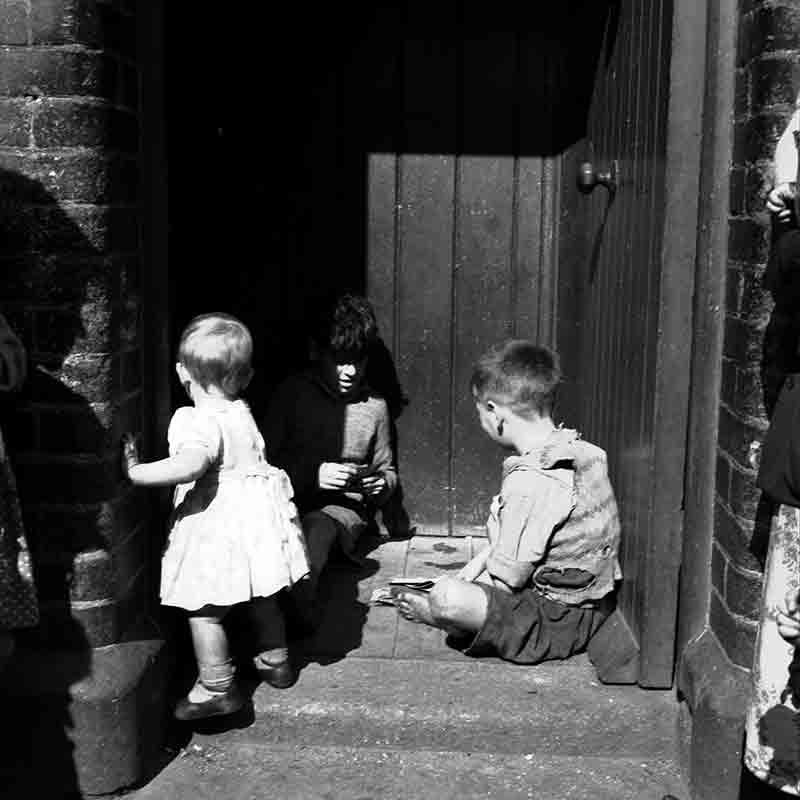 Bock-Schroeder's photos describe Ireland at a time when it was one of the poorest countries in Western Europe in an isolated peripheral location. The background of the photo reportage is the lagging infrastructure, the traditional religiosity of the Irish and the effects of emigration to Great Britain and overseas. 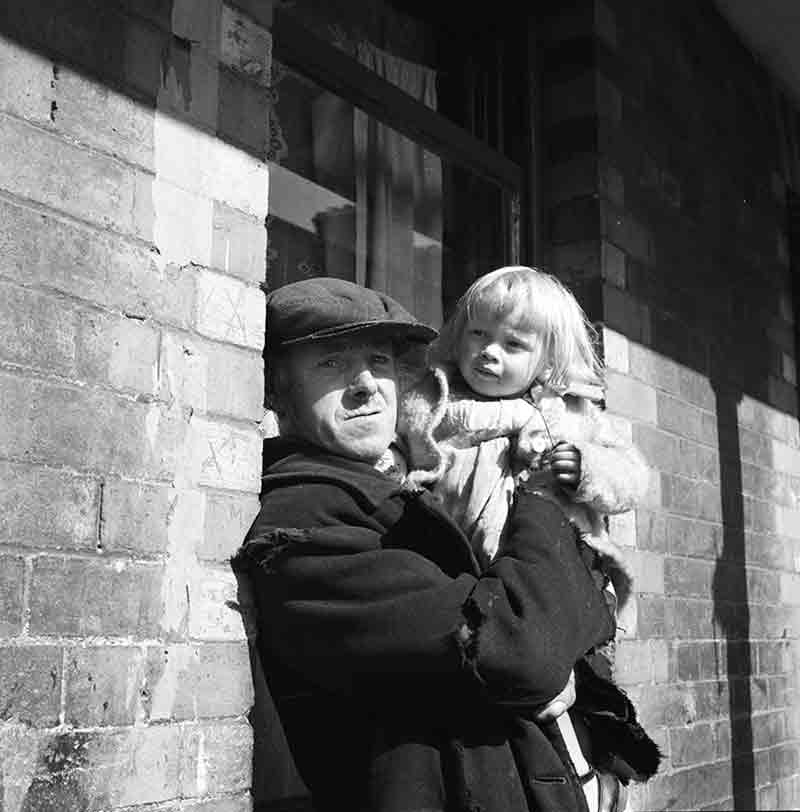 In his pictures of personal encounters, Bock-Schroeder presents a sometimes melancholy but thoroughly positive impression of Ireland and the Irish. 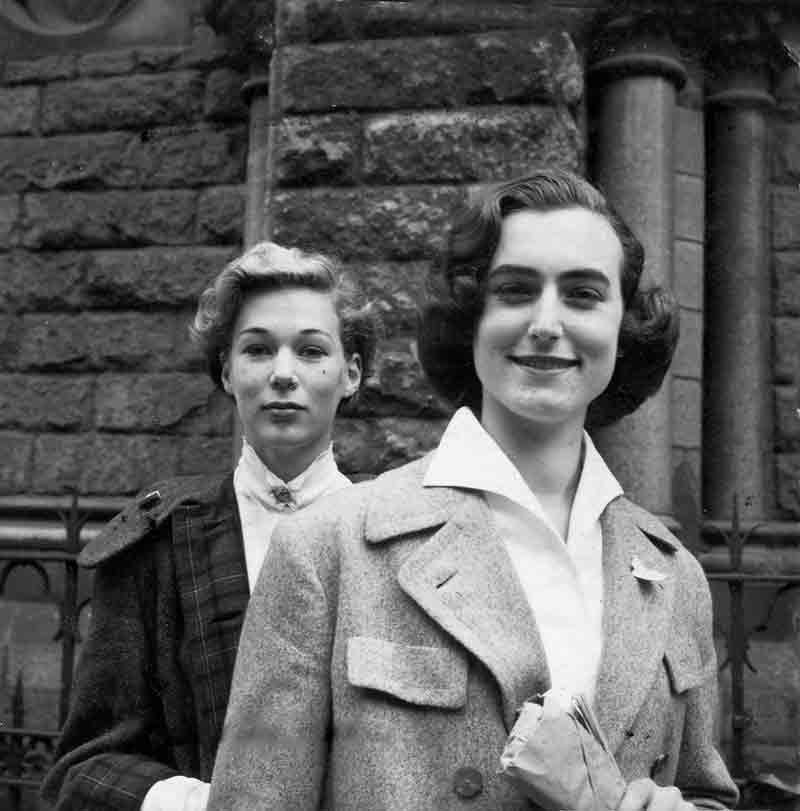 Fashion designer Vera Maxwell came regularly to Ireland to Ireland to purchase Donegal Tweed, a yarn that has been spun in the County of Donegal for centuries. Since she didn't want to travel alone and also needed a photographer for her models, she asked her friend Peter Bock-Schroeder to join her.

Maxwell and Bock-Schroeder had met in the early 1950s and had become close friends. Ms. Maxwell, who had founded her own company, Vera Maxwell Originals, in 1947 and whose design style had attracted clients such as Pat Nixon, Martha Graham and Lillian Gish, had traveled to Ireland in previous years. 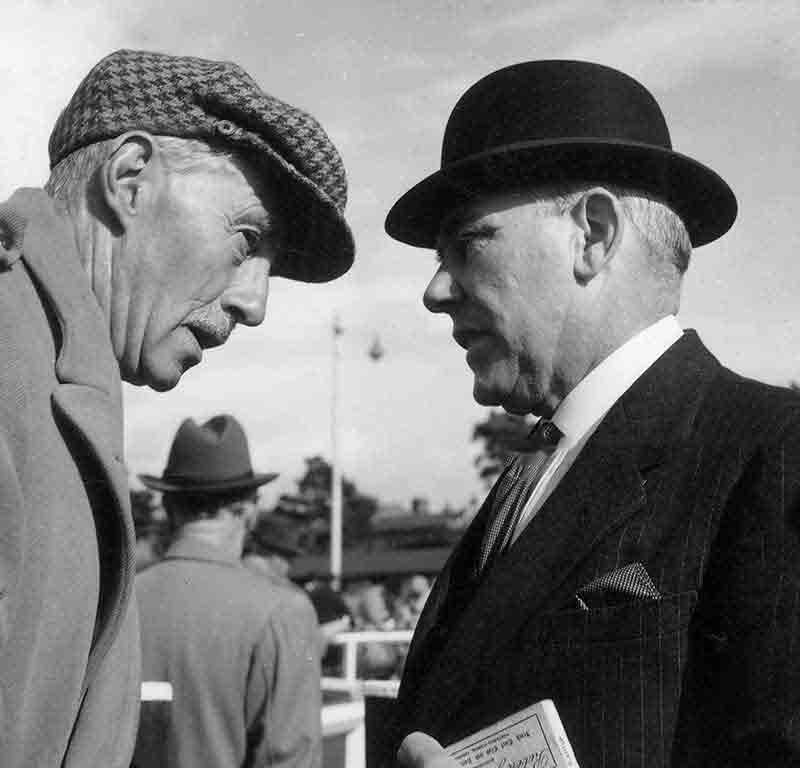 Many historians think that the Irish invented whisky. Irish monks are said to have been inspired by their travels to the Mediterranean in the Middle Ages. They adopted the local technique of distilling perfume and transformed it to create a drinkable product - which they called "uisce betha", which is Gaelic for "water of life".

Over time "uisce" became "whisky". The fact that whisky is sometimes spelled with an e is definitely due to the Irish - this was a marketing ploy by great Irish whiskey distillers in the 19th century to distinguish their whisky from the whisky of the Scots.

Since America loved Irish whiskey at the time, they adopted the Irish spelling of the word.

The Brazen Head is the oldest pub in the Irish capital Dublin. The history of the bar can be traced back to 1198, although nothing remains of the historic building from the time it was founded. The house in which the pub is housed dates from the 18th century and the brick façade, with its barred windows, suggested battlements and gate-like entrance, is reminiscent of a medieval castle.

Irish pubs or public houses were the working man's alternative to the private drinking establishments frequented by those who could pay for entry. In 1735 the Drink on Credit to Servants Act was enacted stating that any publican who sold a drink on credit to servants, labourers or other low-wage earners had no right to seek help from the law in recovering that debt.

It is the oldest law related to pubs in Ireland that is still in effect. During the 18th century it also became illegal to be married in a pub. 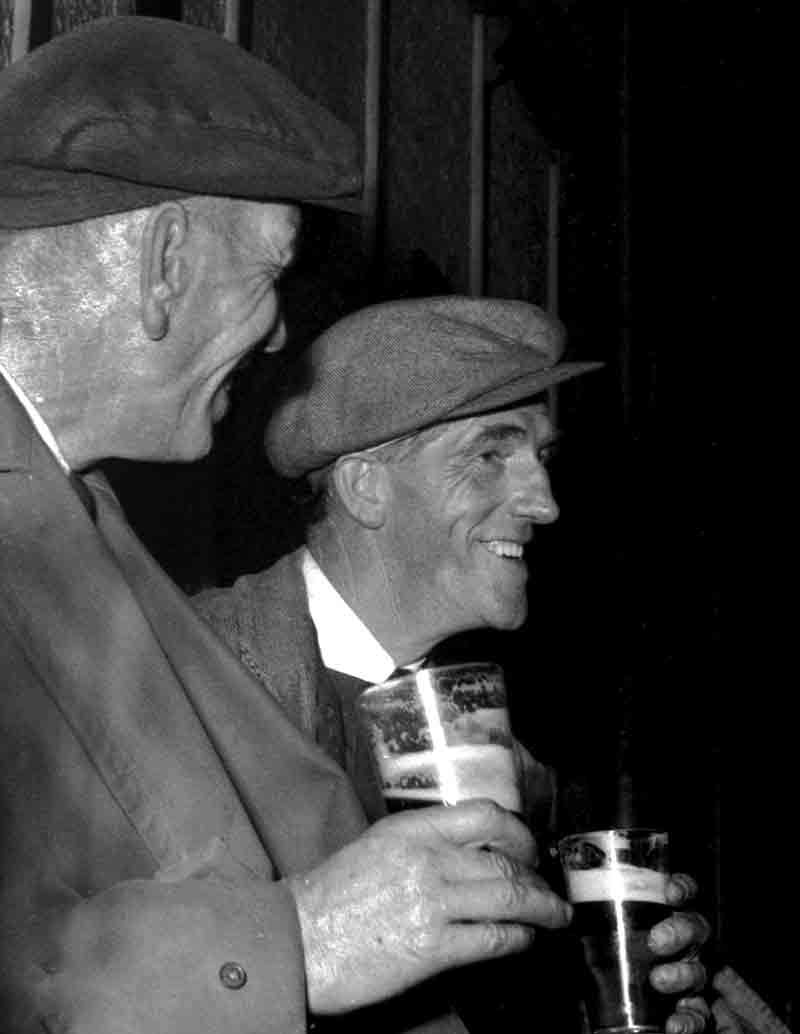 The pubs owed their first great popularity to members of the working class, for whom there was no other place where they were welcome and could meet. James Joyce, Samuel Beckett, Oscar Wilde and Brendan Behan are just a few examples of authors whose stories focus around Irish pubs. 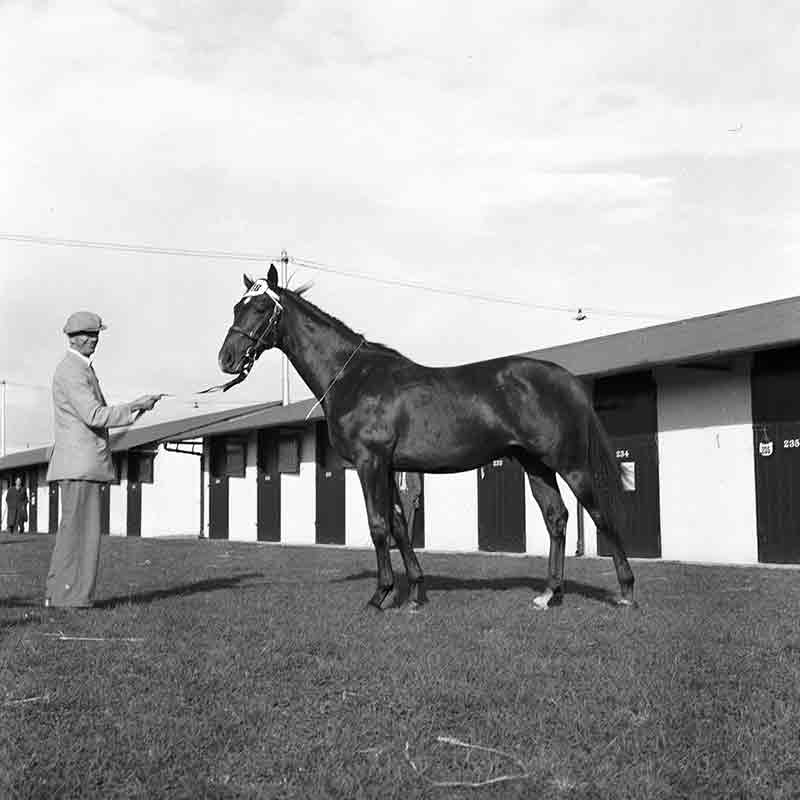 Gambling in various forms has been regulated in Ireland for centuries. Historically, Ireland had a significant horseracing industry and there is a rich cultural history of associated on-course and off-course betting.

The Gaming and Lotteries Act 1956 used to be the main point of reference for any gambling related activity within Ireland.

Horse racing in Ireland is intricately linked with Irish culture and society. The racing of horses has a long history on the island, being mentioned in some of the earliest texts. 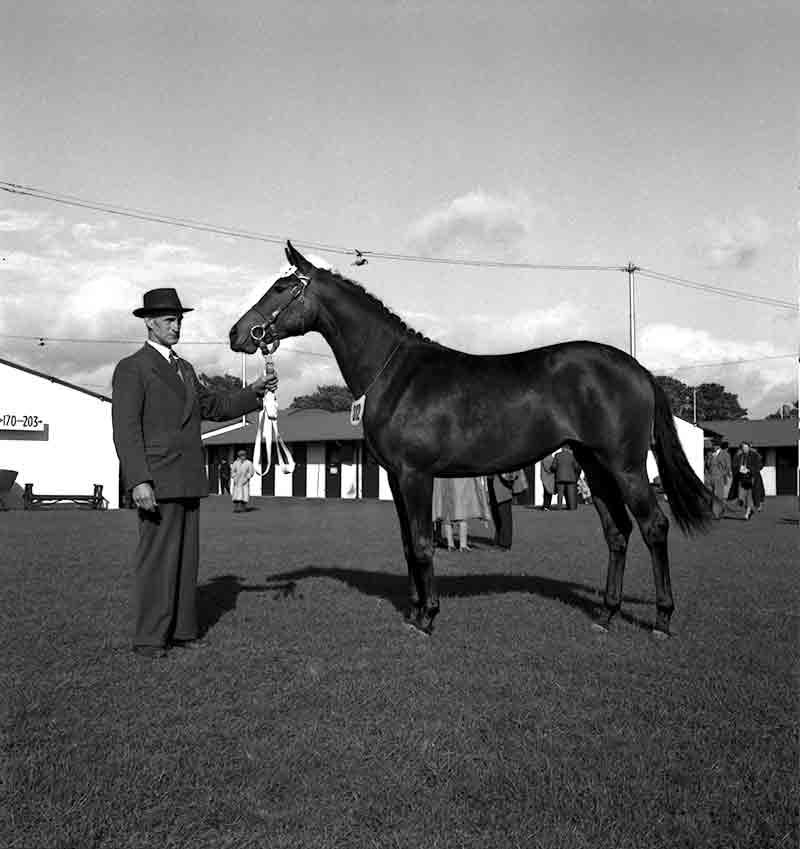 Domestically, racing is one of Ireland's most popular spectator sports, while on the international scene, Ireland is one of the strongest producers and trainers of Thoroughbred horses.

"Mayo, God help us", said the Irish in the 1950s when the German writer Heinrich Böll stated his destination while traveling across the island with his family under difficult circumstances.

Simultaneously but without meeting each other Bock-Schroede travelled by train to Achill Island, where he spotted fishermen at work in Keem Bay and photographed the ruins of houses at the deserted village. 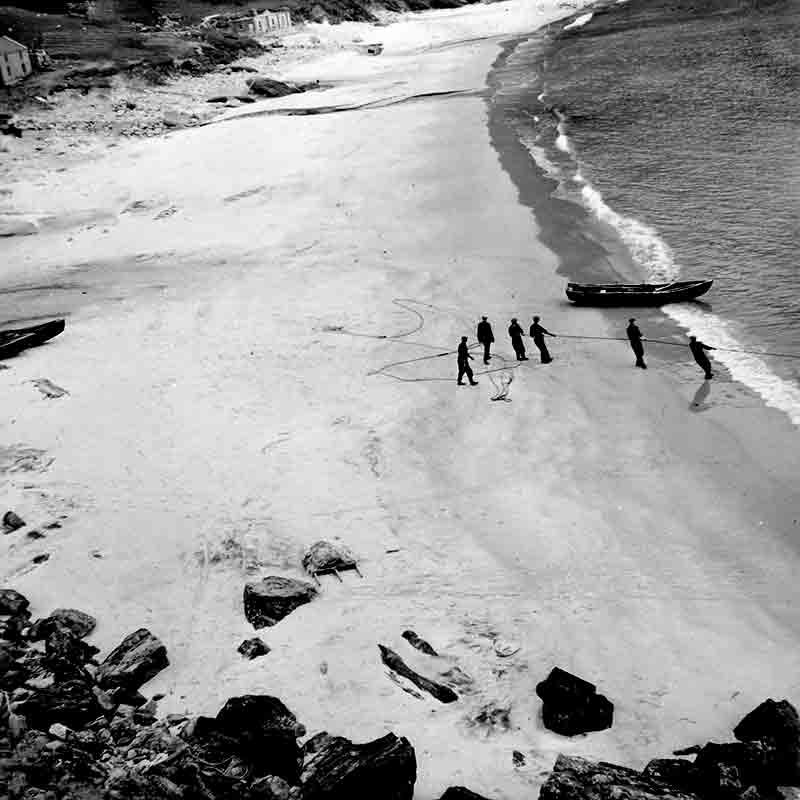 Keem Beach is sheltered between steep slopes to the west of Achill Island. The horseshoe-shaped beach attracts visitors' attention from afar, as its white beach contrasts with the lush green of the surrounding hills.

After World War II, the dangerous hunt for basking sharks began on Achill in small rowing boats with nets and harpoons. Fishermen tell about a bay colored red by the blood of the animals. 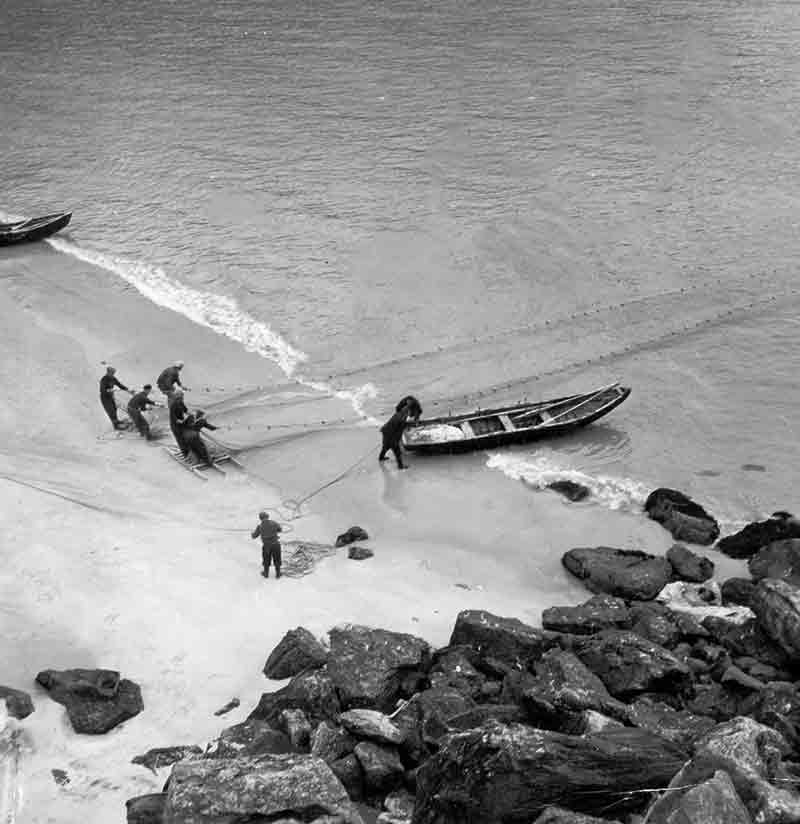 Deserted Village a decaying village, which is buried in the memory of the island from the hard times of the Irish emigration. It is believed that at the end of the Neolithic Period (around 4000 BC), Achill had a population of 500–1,000 people.

The island would have been mostly forest until the Neolithic people began crop cultivation. Settlement increased during the Iron Age, and the dispersal of small promontory forts around the coast indicate the warlike nature of the times. Megalithic tombs and forts can be seen at Slievemore, along the Atlantic Drive and on Achillbeg.

The passing truck of the Swastika Laundry must have had a similar effect on Peter Bock-Schroeder than described by Heinrich Böll in "The Irish diaries".

I was almost run over by a bright-red panel truck whose sole decoration was a big swastika. Had someone sold Völkischer Beobachter delivery trucks here, or did the Völkischer Beobachter still have a branch office here? This one looked exactly like those I remembered; but the driver crossed himself as he smilingly signalled to me to proceed, and on closer inspection I saw what had happened. 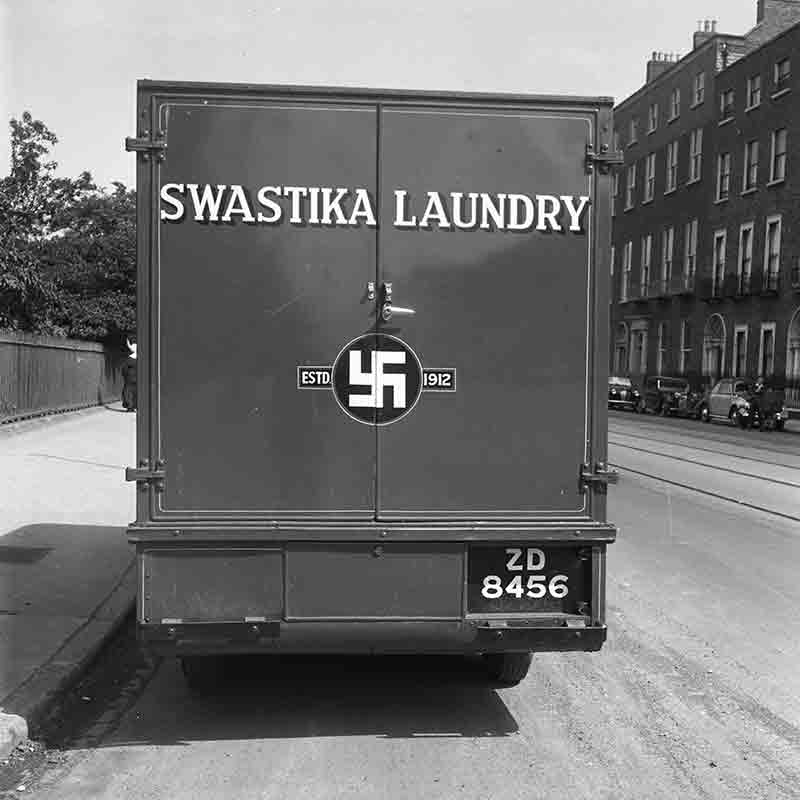 It was simply the "Swastika Laundry," which had painted the year of its founding, 1912, clearly beneath the swastika; but the mere possibility that it might have been one of those others was enough to take my breath away. 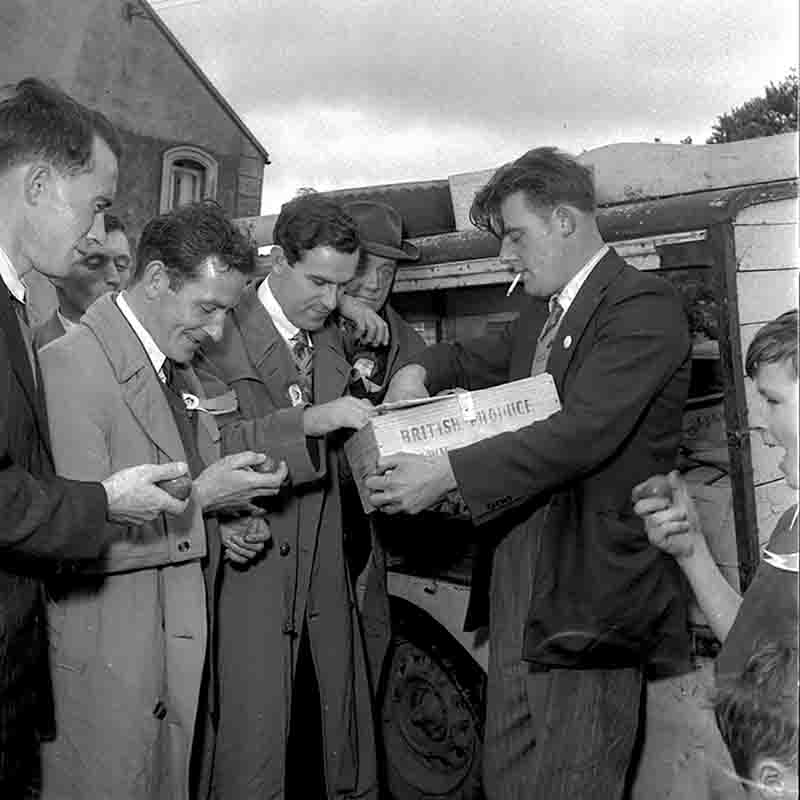 The 1950s in Ireland were marked by economic stagnation and emigration. As a result of an expansionary budget, a major deficit in the foreign deficit was recorded in 1956. 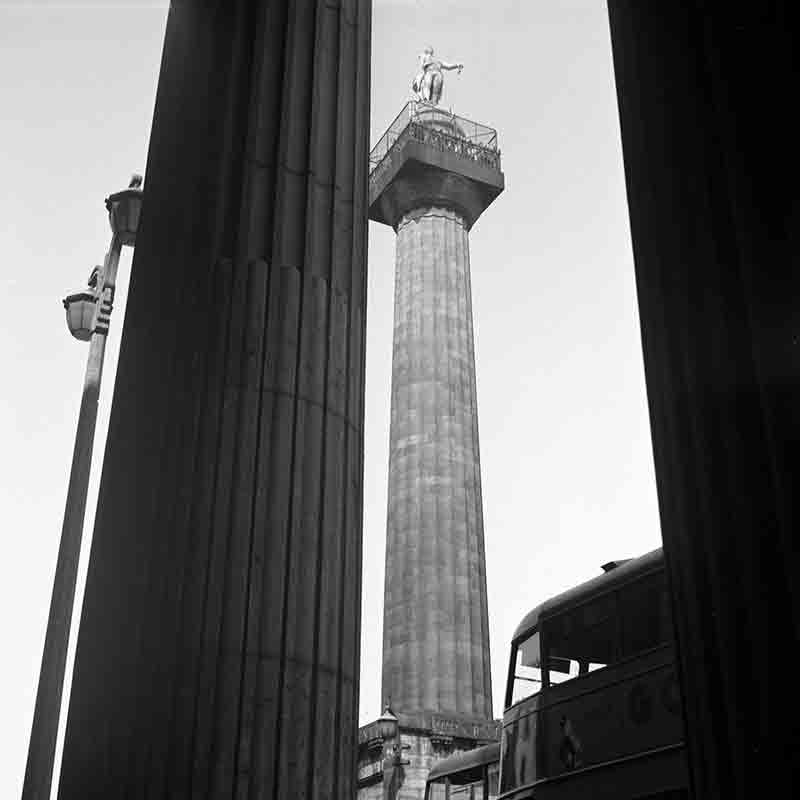 Nelson's Pillar was a large granite column capped by a statue of Horatio Nelson, built in the centre of what was then Sackville Street (later renamed O'Connell Street) in Dublin, Ireland. Completed in 1809 when Ireland was part of the United Kingdom, it survived until March 1966, when it was severely damaged by explosives planted by Irish republicans.

Its remnants were later destroyed by the Irish Army. A prominent city centre monument honouring an Englishman rankled as Irish nationalist sentiment grew, and throughout the 19th century there were calls for it to be removed, or replaced with a memorial to an Irish hero. 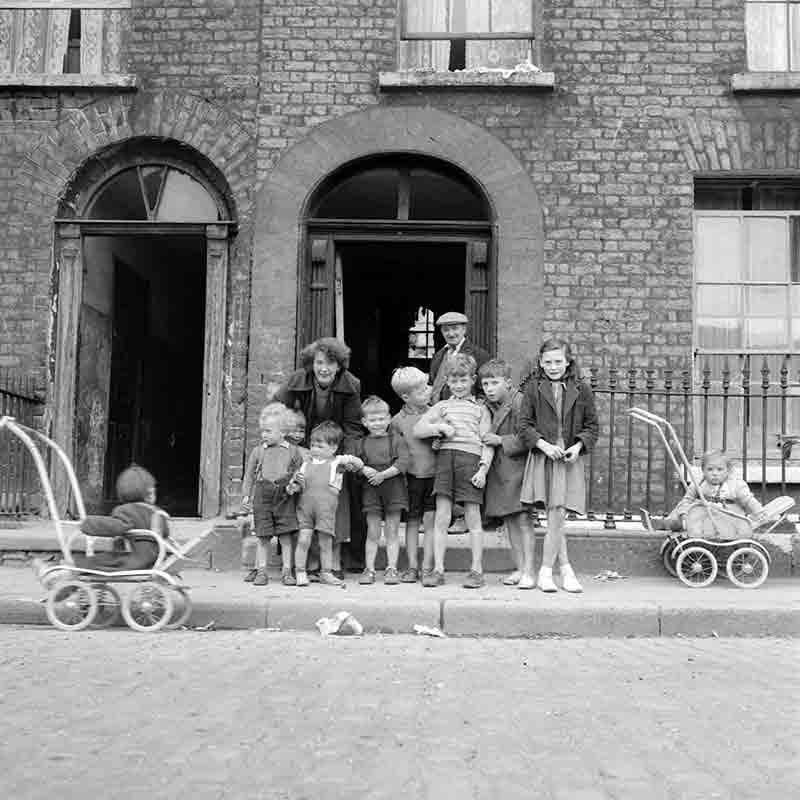