Hussein bin Talal, born in 1935, was heir to the throne of the Hashemite Kingdom of Jordan. He was educated to assume the responsibility of safeguarding the Hashemite family legacy. Although he was often unpopular with Palestinians and Arab nationalists, he maintained the firm loyalty of his Bedouin tribesmen. At the same time, he understood the importance of his Western connections, and as Great Britain lost influence in the Middle East he worked diligently to form close ties with the United States. 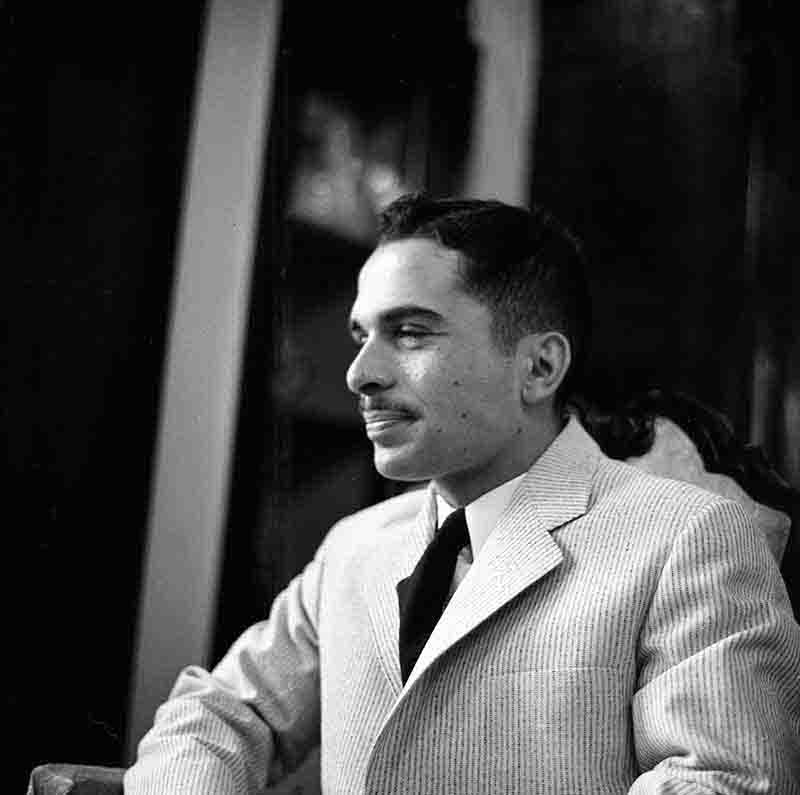 At the outset of his term of office, parliamentary life flourished. In 1954 the constitution was amended to strengthen the democratic basis. On December 14, 1955, Jordan became a member of the United Nations. On March 1, 1956, the young king dismissed the British officers of the Jordanian army and suspended the second Anglo-Jordanian treaty in order to win over public opinion in the country.

On July 23, 1956, Nasser of Egypt nationalised the Suez Canal. Subsequently, on October 29, Great Britain, France and Israel attacked Egypt and occupied the Suez Canal and all of Sinai. Jordan was not attacked, but the public opinion of the country was very sympathetic to the nationalist Nasser.

The Arab countries signed the "Arab Solidarity Agreement" on January 19, 1957, which provided Jordan with annual support of US$36 million. A group of Jordan's military attempted a coup in April 1957, and subsequently King Hussein II, supported by the loyal East Bank Bedouins, banned political parties to restore stability to the country. 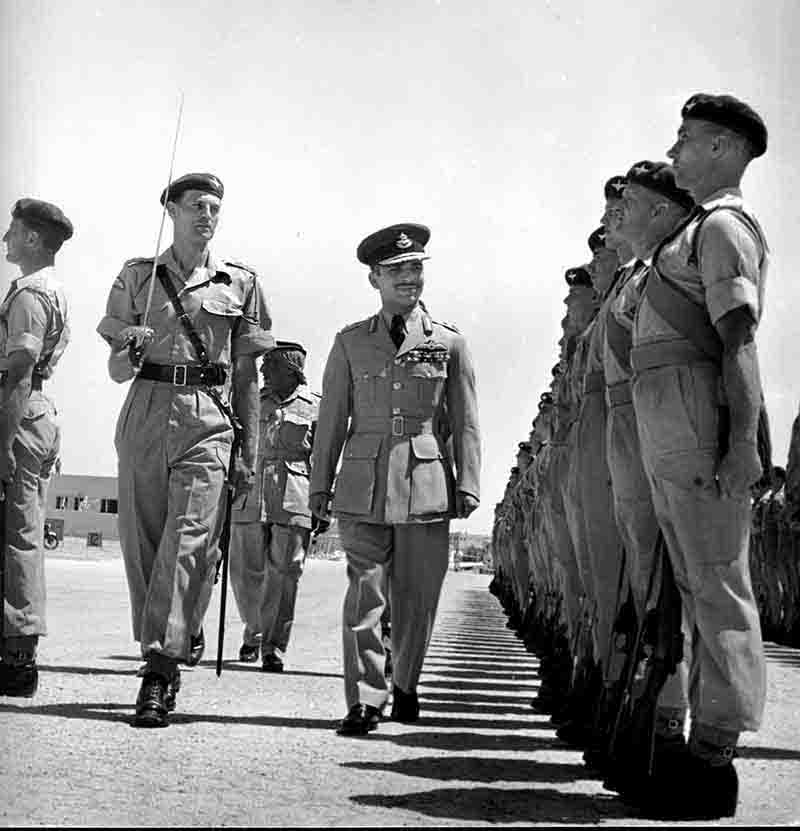 On February 14, 1958, two weeks after the founding of the United Arab Republic (VAR) by Egypt and Syria, the conservative governments of Jordan and Iraq announced their merger into the Arab Federation, which was named the "Hashemite Association.

The new federation did not exist for long and was dissolved after five months. 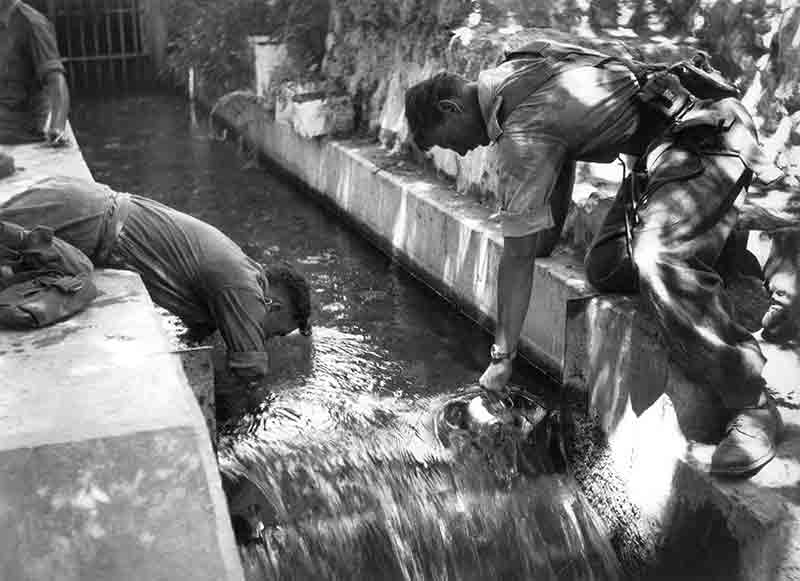 An appeal for assistance from King Hussein saw the Parachute Brigade, less the 1st Battalion, flown into Amman to secure the airfield and bolster the King’s authority. Within two years of their failed invasion of the Suez Canal zone in 1956, British troops again intervened in an important Middle Eastern country.

As of July 17, 1958, some 3,500 British troops were stationed in Jordan, and 50 U.S. military aircraft provided air cover for the British troop deployment. They remained until October 29th returning to Cyprus and then England.

The Jordanian intervention of July 1958 took place despite the steady decline of the British position in the country in the previous three years. Rapid action to a trouble spot had averted probable hostilities in this volatile area. 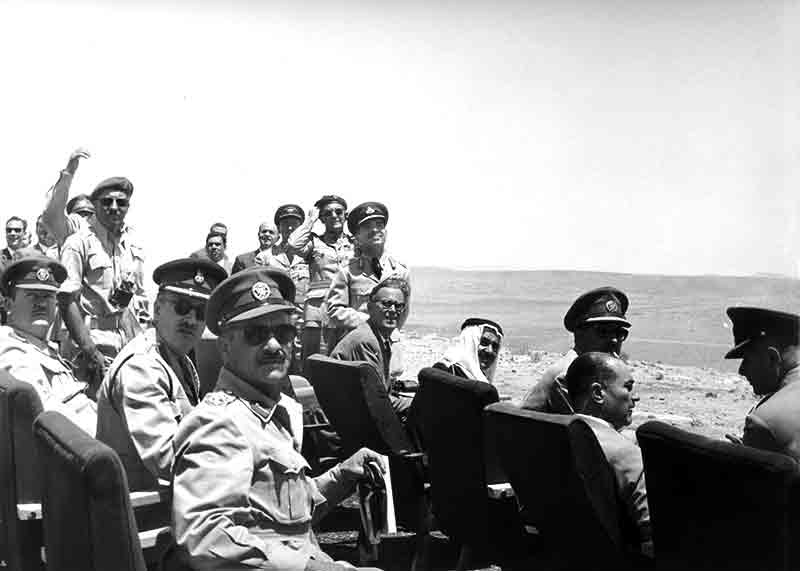 Hussein and Military personal watches displays of the Hunter Squadron

The British government, under Prime Minister Harold Macmillan justified its use of military force in support of King Hussein's regime by arguing, that such military aid would stabilise the situation in Jordan, and enable the Jordanian government to resist aggression and threats to the integrity and independence of its territory. 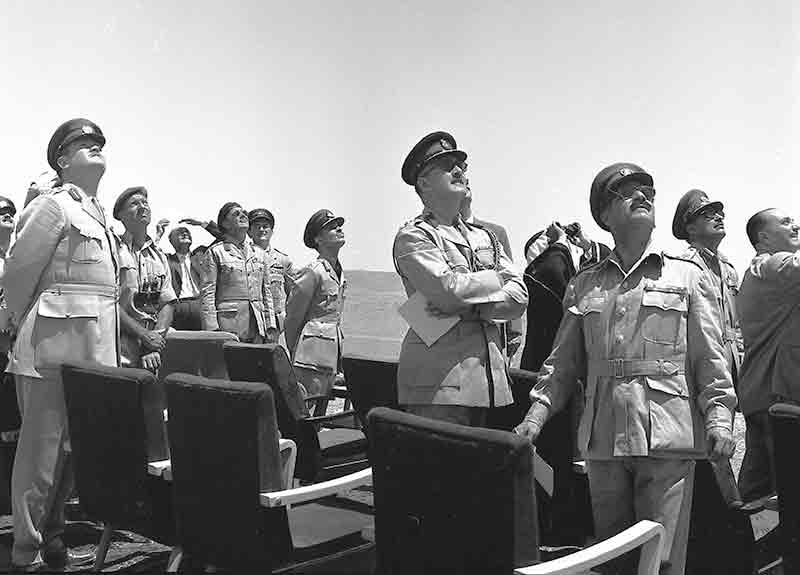 Hussein and Military personal watches displays of the Hunter Squadron

King Hussein, his military personal and international military observers watch the aerobatic displays of the Hunter Squadron. When the Jordanian crisis of 1958 arose, six fighters of Squadron 208 were dispatched from Cyprus to Amman, to maintain the monarchy there.

King Hussein was so grateful to the British forces in Jordan ("Britforjor") that he wanted to give a medal to all British soldiers who had served there on this occasion. It was to take forty years before this medal was awarded. 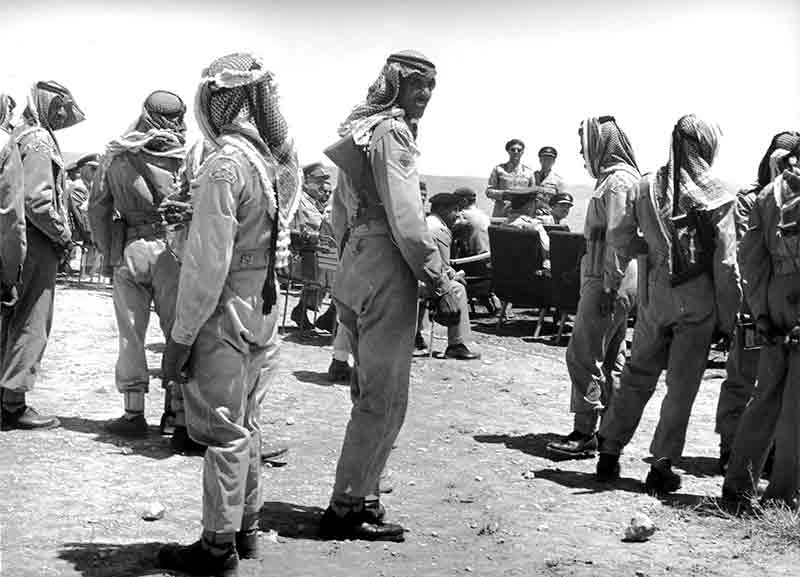 For fear of assassination during the visit Jordon Army Guard for security surrounded him [King Hussein] and soldiers of Jordan posted everywhere along the route. 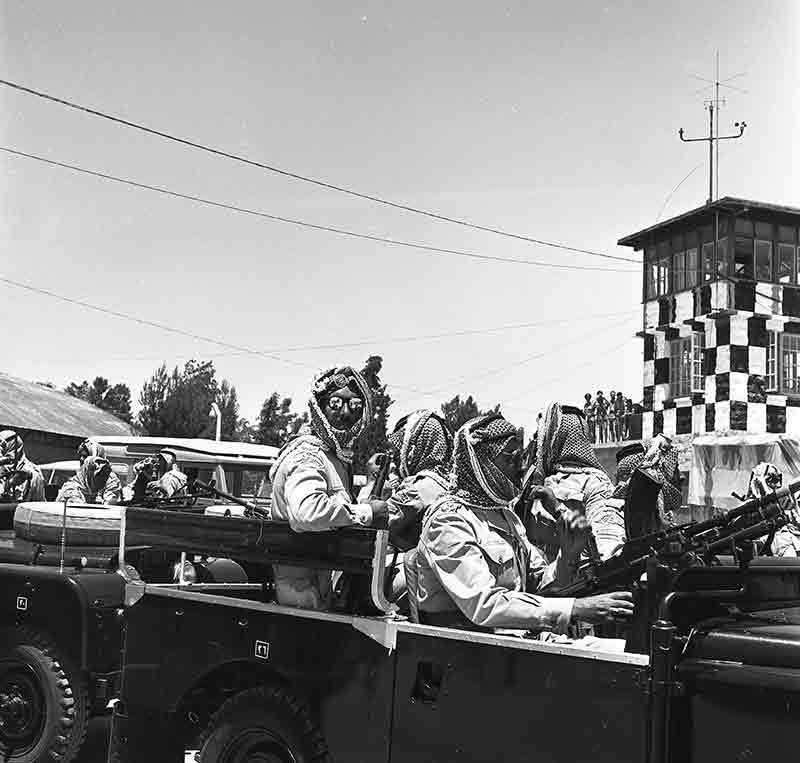 For some weeks, the political atmosphere in Jordan was explosive, and the government kept order through limited martial law. The army continued its unquestioning loyalty to the king. 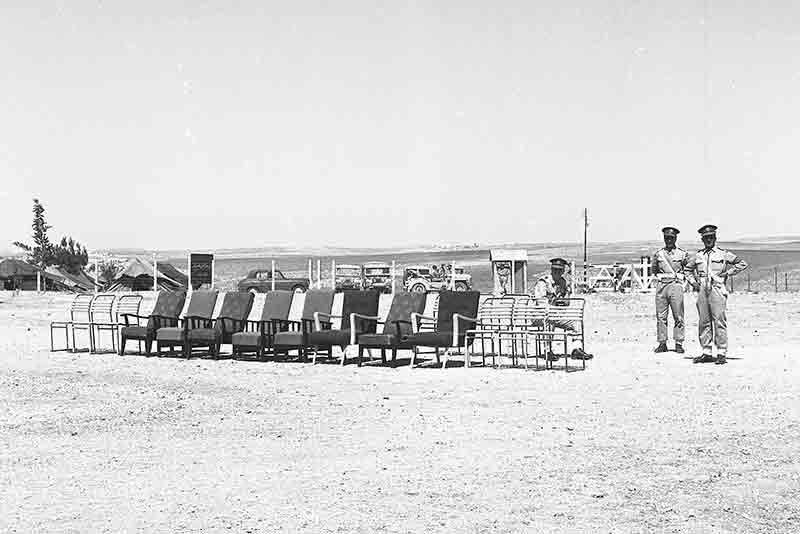 Waiting for the guests of the airshow

The British government, eager to see the pro-Western Ḥussein secure in Jordan, stationed British paratroops in the country until late 1958. As a result, anti-Hāshimite Palestinians supported by Nasser made no further attempts to overthrow the monarchy.

British troops completed their withdrawal from the country on November 2, 1958. King Hussein lifted martial law on December 1, 1958. Some 100 individuals were killed during the crisis.

Although during King Hussein’s reign there were numerous events that caused tension between Jordan and its Anglo-American allies, both London and Washington agreed that support for Hussein served their interests. The Hashemite Kingdom stood as a barrier to Soviet expansion, radical Arab nationalism, and militant Islam. 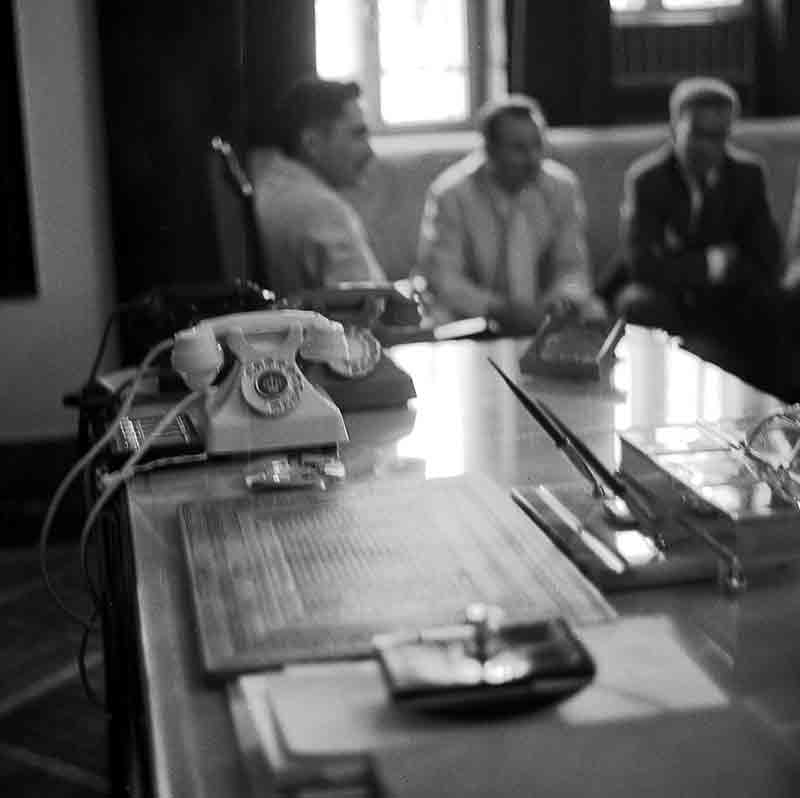 From the Desk of Hussein King of Jordan, 1958 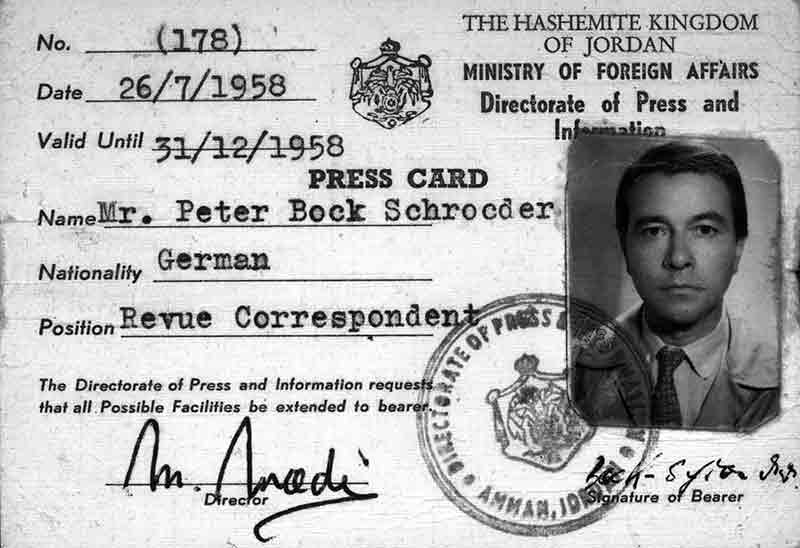 After having reported about the Suez crisis in 1956, photo journalist Peter Bock-Schroeder returned to the Middle East in 1958, to report on the events in Jordan. 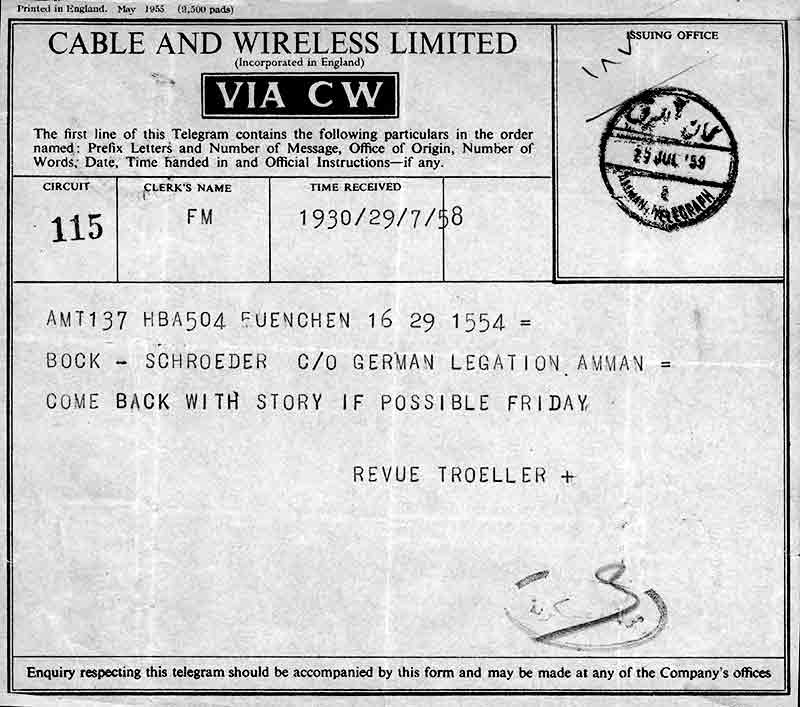 Before Mail, WhatsApp and Twitter, there was the telegram. For a long time it was the fastest way to correspond globally. World history as well as private matters were communicated in short lines. Dispatches and radio messages marked a milestone in the accelerating history of human civilisation.

For many years it was Peter Bock-Schroeder's main medium of communication with the news and current affairs editors of his contractors.