Solitude of the Polar Zone

The army clergy prays and the men of the weather station humbly bow their heads. The priest who used to look after the 12 soldiers, 3 civilian craftsmen and 11 scientists had died. Through Hendrick Patterson's visit, they experience the first service since many weeks. 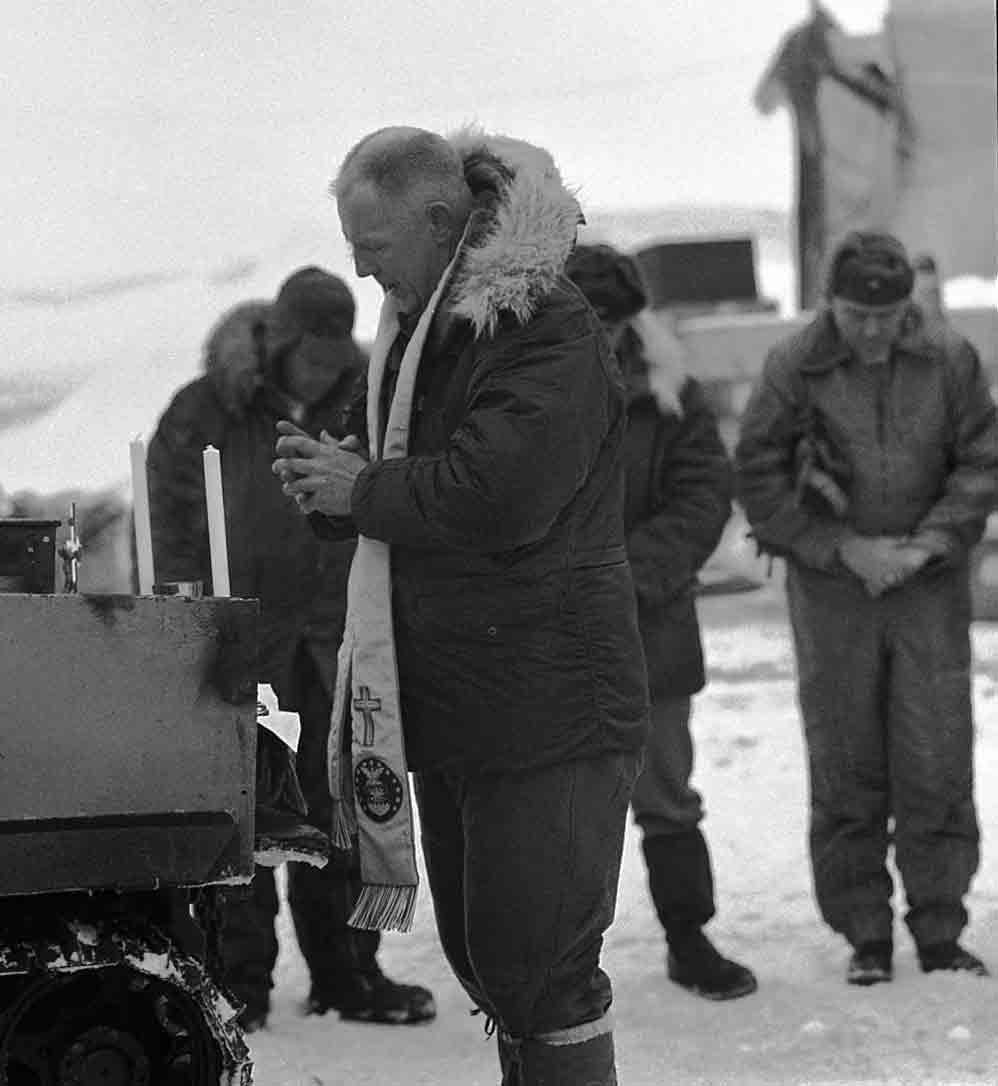 Priest Hendrick Patterson prays with the men of Alpha II

The men on Alpha 2 observed the general weather situation in the polar region for scientific and military purposes. Here, scientists, soldiers and craftsmen lived under the most adventurous conditions in the desolate solitude of the Polar Zone.

Connected only by radio and occasionally by a mail and material plane the mainland, everyone who worked there received 1000 dollars in addition to their monthly salary. 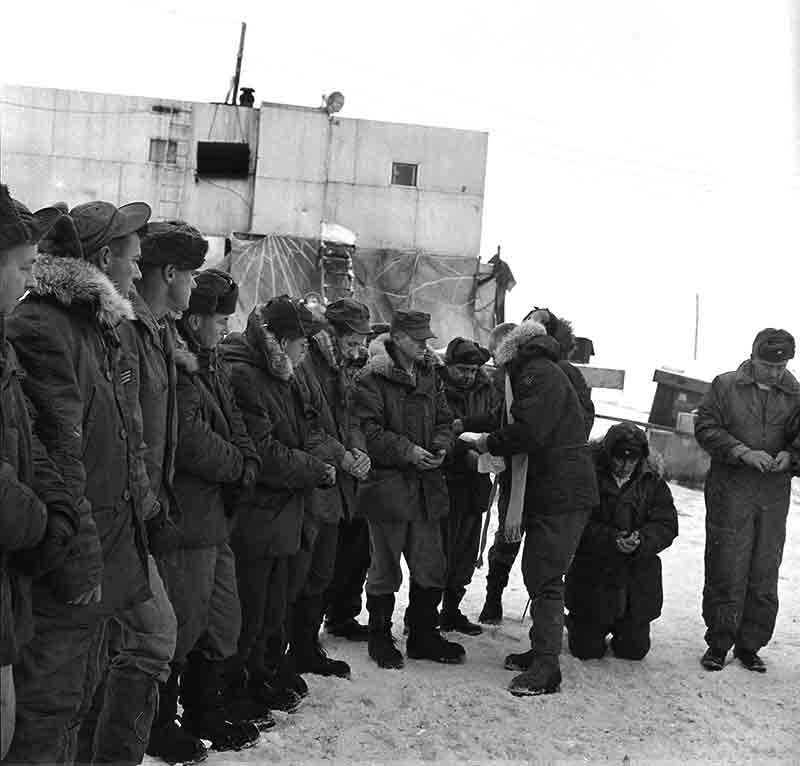 Fletcher's Ice Island or T-3 was an iceberg discovered by U.S. Air Force Colonel Joseph O. Fletcher. Between 1952 and 1978, it was used as a manned scientific drift station which included cabins, a power plant and a landing strip for planes. The number of people at Station Alpha usually varied between 25 and 30, about half being U. S. Air Force personnel and half civilian scientific investigators.

All the Air Force men volunteered for duty at the station on the basis of a 6-month tour. The camp commander, an Air Force officer, was in overall charge of the station. He was responsible for camp operations, logistics, and safety.

Most of the supply was operated in winter, while the runway was suitable for aircraft landing. This also indicated operation under the most difficult weather conditions, such as very low ceilings and prevailing limited visibility.

Accurate weather forecasts were only available much later due to the lack of reporting stations and the distance over remote Arctic wastes. 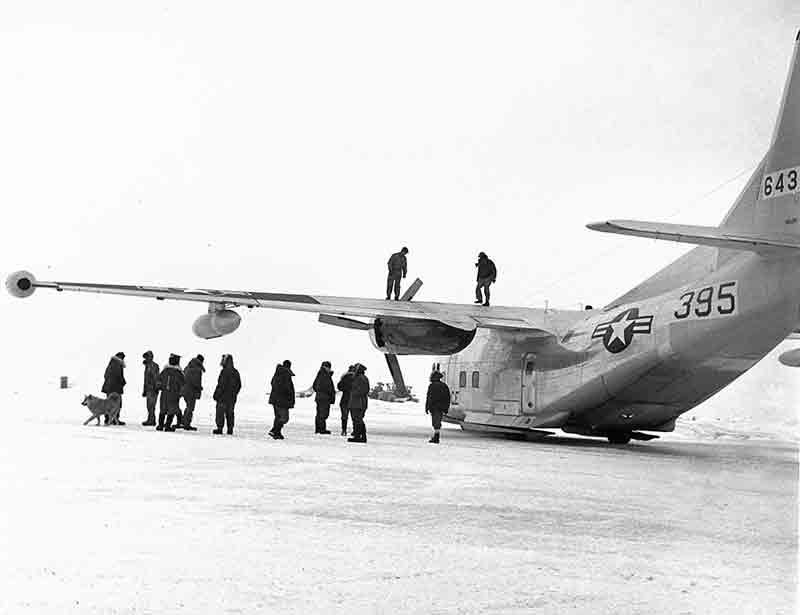 The iceberg was a thick tabular layer of ice that drifted clockwise through the central Arctic Ocean. First inhabited in 1952 as an arctic weather forecast station, it was abandoned in 1954, but was inhabited again two times.

The station was mainly used by scientists and some military crew members and during its existence was mainly supplied by military aircraft from Utqiagvik, Alaska.

The iceberg was later occupied by the Naval Arctic Research Laboratory and served as a base of operations for the Navy's Arctic research projects such as seabed and ocean wave studies, seismographic activities, meteorological studies and other classified projects under the direction of the Department of Defense.

Before the satellite era, the research station at T-3 was a valuable site for measurements of the Arctic atmosphere.

For routine resupply flights, C-54 and C-47 aircraft were used. From June to August, melt-water holes and channels on the runway made it unusable, and all resupply was by parachute drop. 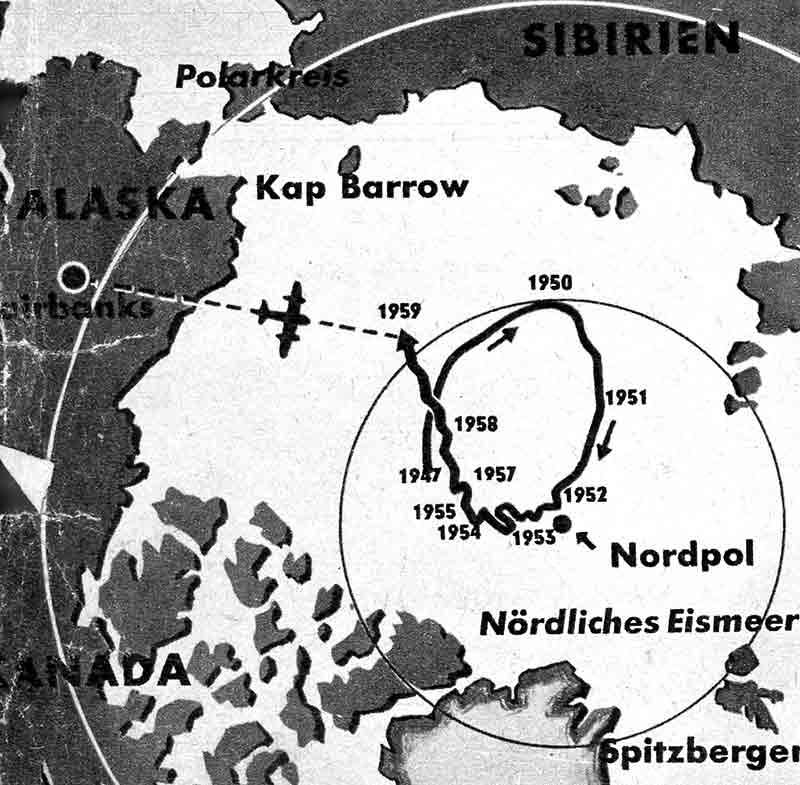 The temporary drift station, which consisted of isolated huts, was first assembled by the US military. By the end of May 1957, a 1500-meter-long runway and most of the station's 26 Jamesway huts were completed to allow scientific operations to begin. 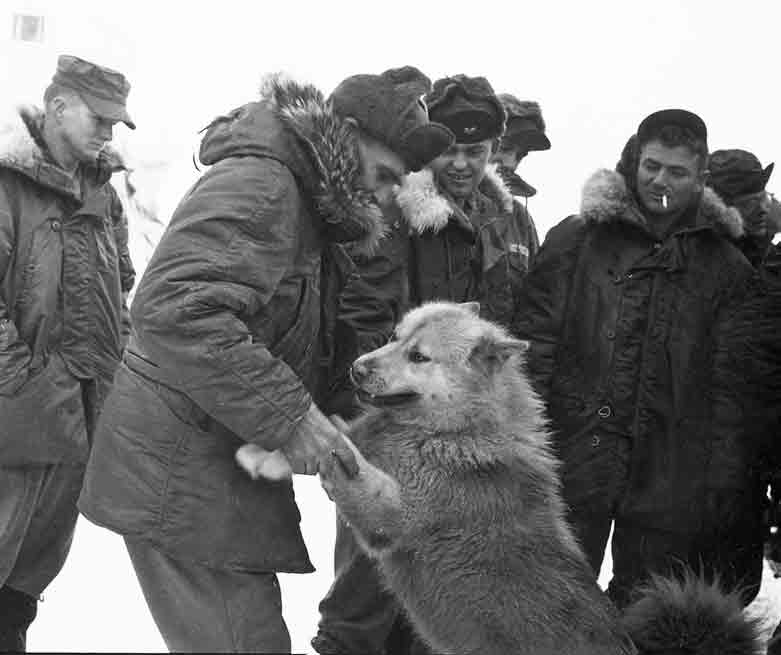 Drifting Station Alpha was one of two scientific stations on the floating ice of the Arctic Ocean. They were established and supported by the U. S. Air Force under Project ICE SKATE as a major contribution to the Arctic Ocean Study Program formulated by the U. S. National Committee for the International Geophysical Year (1957-1958).

The scientific programs conducted on these stations were largely an outgrowth and expansion of investigations conducted by the Air Force Cambridge Research Laboratories (formerly Air Force Cambridge Research Ceneer) on Fletcher's Ice Island T-3 (IGY Drifting Station Bravo) in 1952-1954 and 1955. In general, 25 to 30 military and scientists occupied the camp simultaneously.

The camp was equipped with a continuous electrical power supply, oil heating, weasels, caterpillars, and a grader for transport and runway maintenance, electric washer, dryer, and shower facilities, and an excellent radio station for both official and amateur frequencies.

The gross weight of the camp was approximately 500 tons. The major portion of this weight consisted of fuel that was flown in primarily by C-124 Globemaster aircraft. 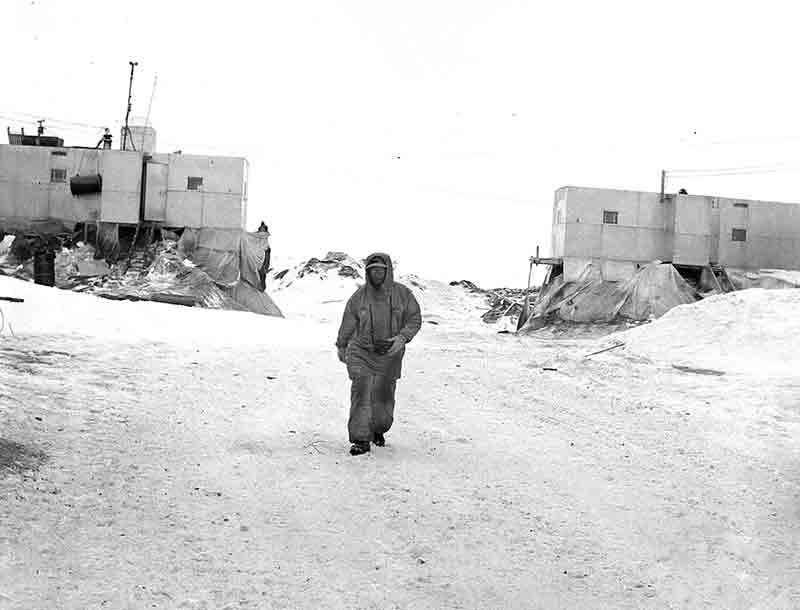 Winds of more than 45 knots and temperatures below minus 30° Fahrenheit had also been recorded at both stations during the supply operation.

The supply of T-3 was hindered by a mixture of different obstacles. Due to the constantly moving position of the iceberg, supply had to be provided from two air bases, Point Barrow (Alaska) and Thule Air Base (Greenland).

At that time, flights were performed without navigation aids, and the landing of the aircraft on the constantly moving iceberg T-3 was performed exclusively by dead reckoning and sky grid navigation, often hampered by long periods of twilight that prevented sky observation. 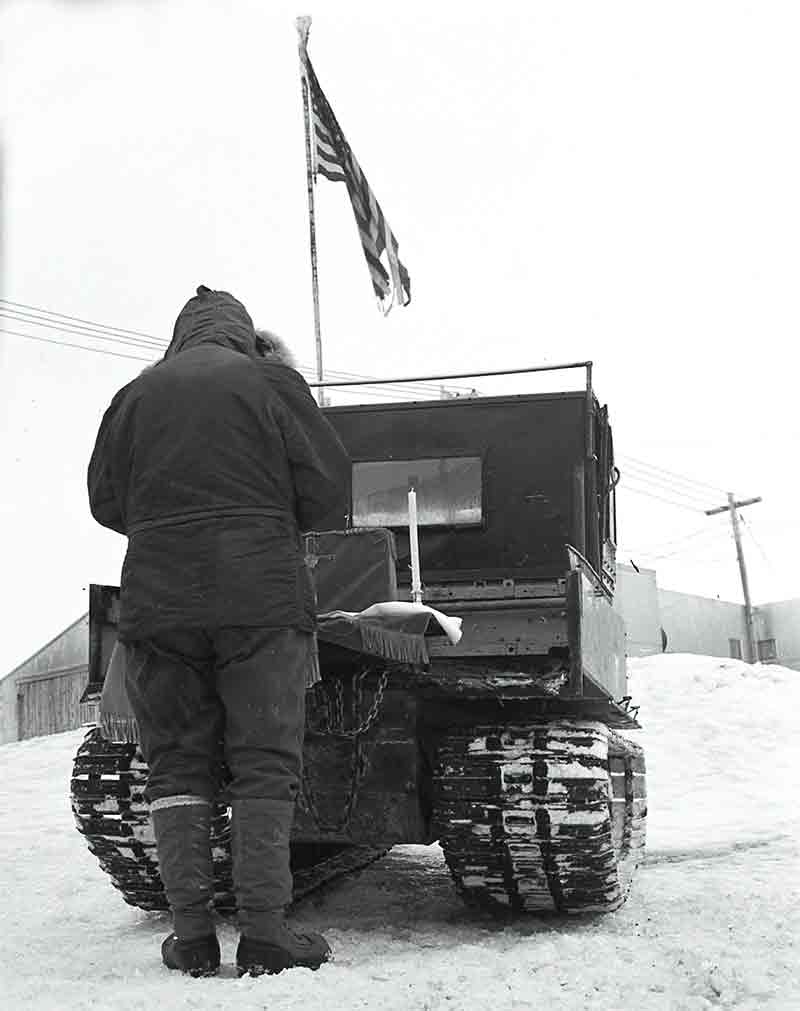 On 3 April 1958, the first crack formed near the camp. Ridging along this crack and subsequent cracks made the camp position untenable. A possible new location was found about 2 km away; however, the difficulties and hazards of moving the entire camp that distance were so great that for a time abandonment of the camp was considered.

But, due to the special requests of the camp commander and scientific leader, permission was obtained to continue operations with a skeleton crew which, if necessary, could be evacuated by one C-47.

After the situation had been assessed and the decision made by Alaskan Air Command to provide the additional support necessary for moving to the new floe, the personnel were returned with additional help.

With the outstanding efforts of all concerned, the move was completed by 5 May 1958. Careful planning resulted in a minimum loss of scientific data, and the new camp benefited from lessons learned in the construction and use of the first.

Since the nearest alternative air force bases were 764 km away, potential in-flight emergencies could have fatal consequences. In this context, pilots and their crews had to accurately calculate cargo and fuel loads to ensure not only a safe landing but also a safe return from the iceberg. 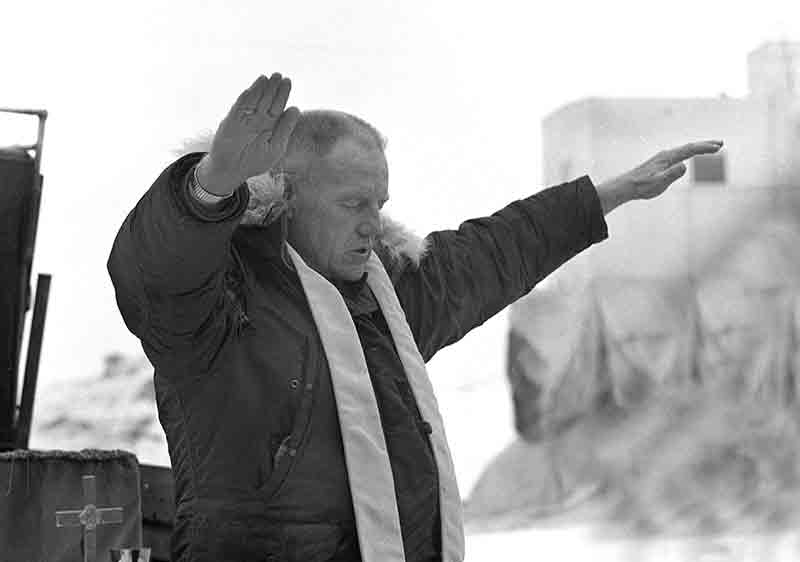 Worship on Fletcher's Ice Island, 1959. The US Army's highest Protestant clergyman visited an isolated group of men in the Alaska region for just one hour. Hendrick Patterson arrived by plane at the wandering ice floe in the North Pole area, where the USA has a permanent weather station. 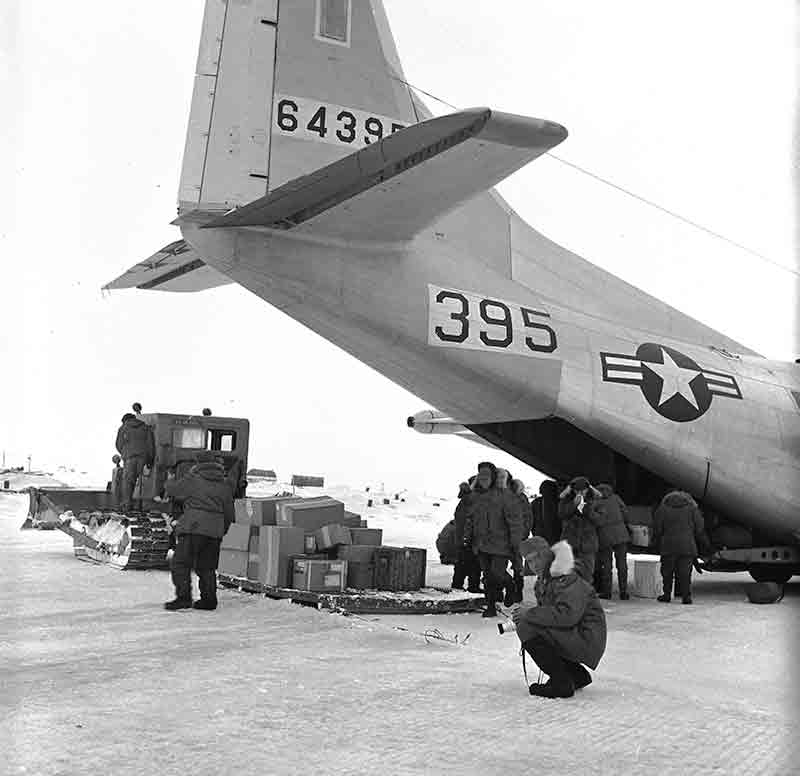 Photo reporter Peter Bock-Schroeder accompanied the army clergyman on this dangerous flight into the polar desert. 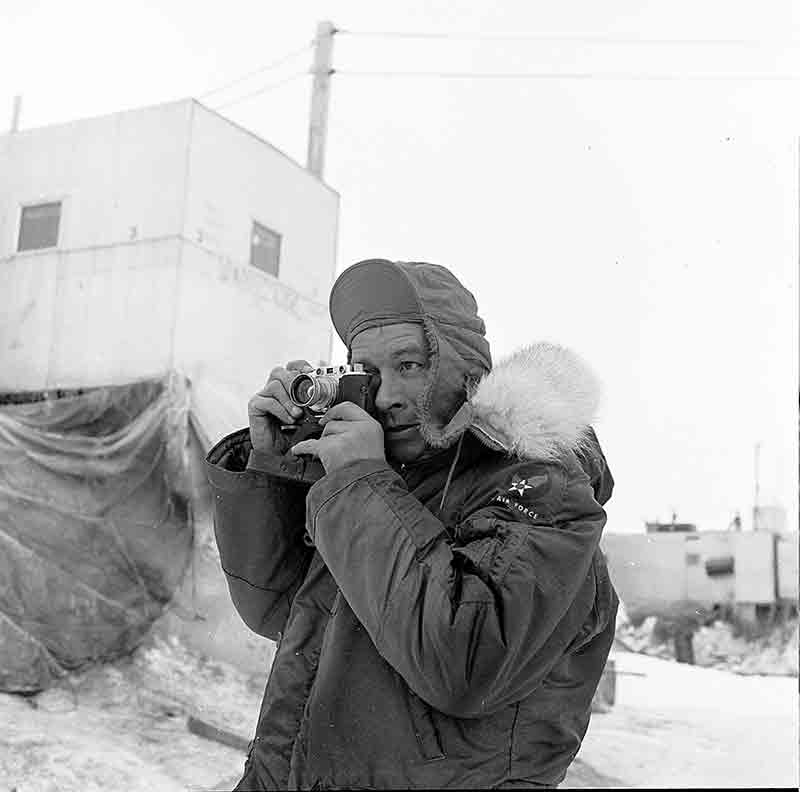 Peter Bock-Schroeder only found out afterwards that the giant plane had landed on an only two meter thick ice surface. However, the plane weighed 80,000 kilograms. Heavy storms and fog often make it impossible to approach ice island for weeks.

Article in the Fairbanks News