A tribute to the Russian capital

Photographic records reach their full significance in historical moments. The Soviets has become one of Bock-Schroeder’s most important and poignant reportages.

In 1956, one year after the peace treaty between Russia and Germany, Peter Bock-Schroeder was the first West German photographer to be permitted to visit the former USSR for a photo reportage. The background of this trip was the shooting of the movie "Russia today, We saw with our eyes" about the Soviet Union for western cinemas. 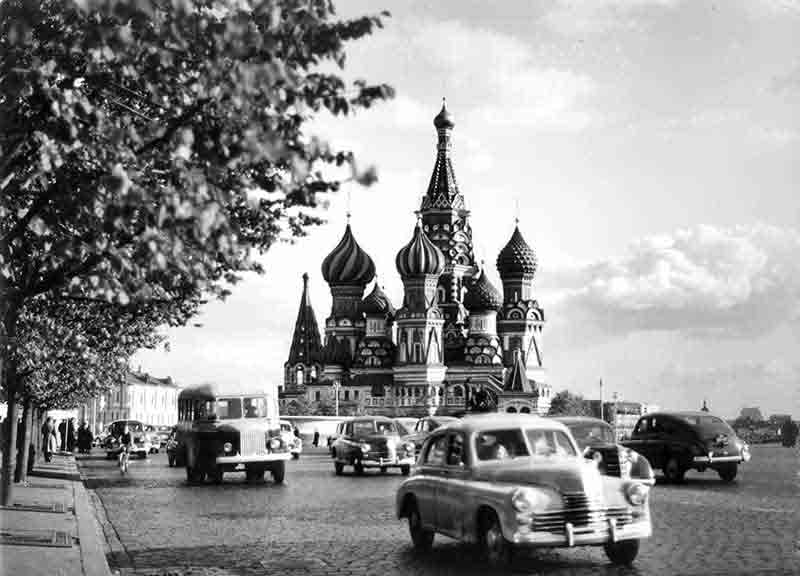 The film was approved by the Soviet authorities. It was created under the same conditions under which all Western journalists worked in the Soviet Union at that time. In almost a year of production, they created the documentary under incredibly difficult conditions. 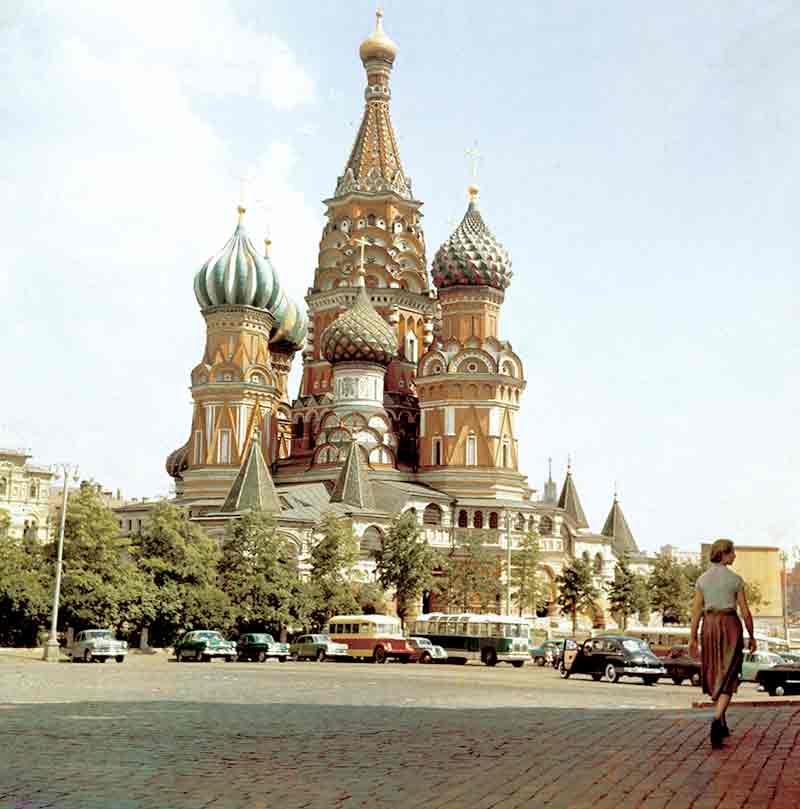 Bock-Schroeder was monitored at all times by a supervisor from the state authorities. But he managed to take pictures of people in their natural environment, his pictures tell a visual story about the daily life behind the Iron Curtain. 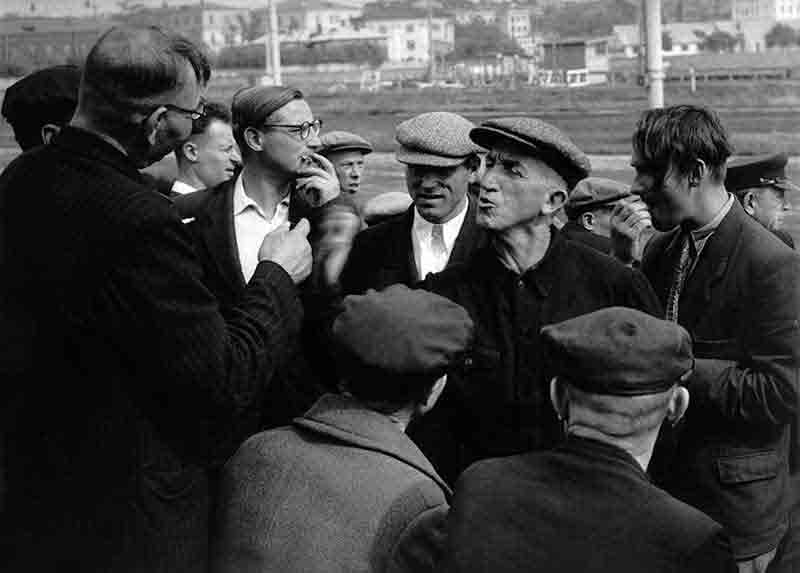 Several times the German and the Russian film crews had threatened to cancel the production. After months of hard fought negotiations the German production company and the Moscow Central Documentary Film Studio agreed on the version of the respective authorities and their censorship institutions, although sometimes grudgingly given. 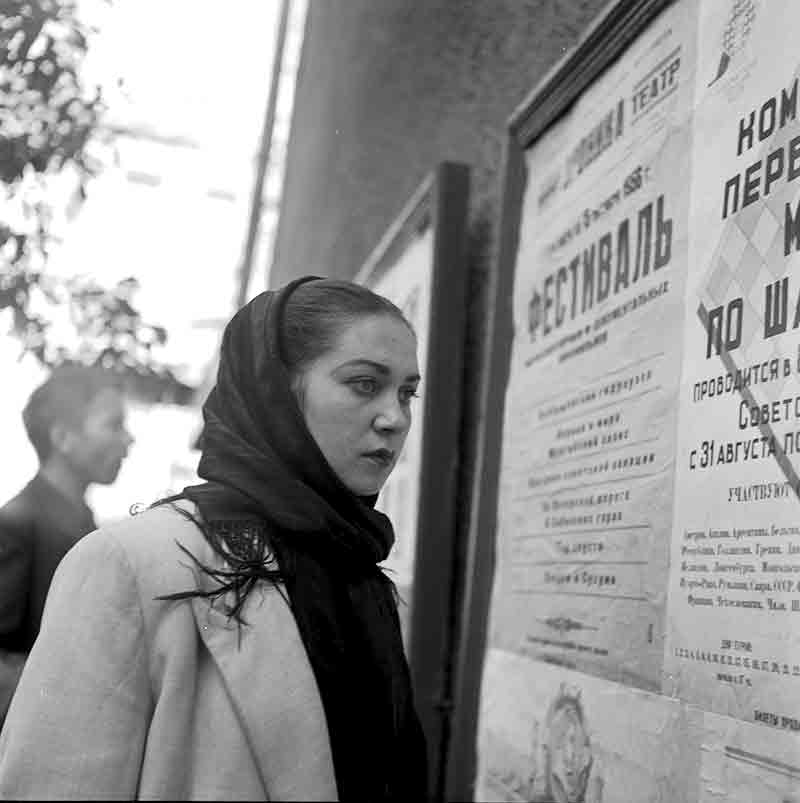 Pictures of western reporters allowed, for the first time to get a more reliable picture of the various aspects of the people, economy and culture of the Soviet people. 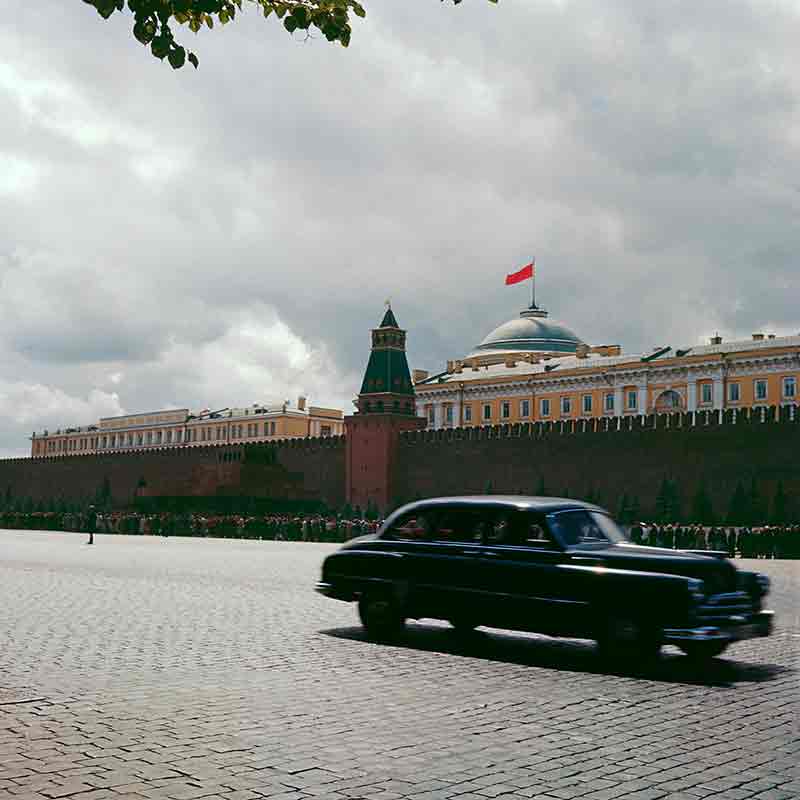 Queue in front of the Lenin Mausoleum, Moscow 1956

People queue in front of the Lenin Mausoleum. The Mausoleum is located directly on the Red Square of the Russian capital. 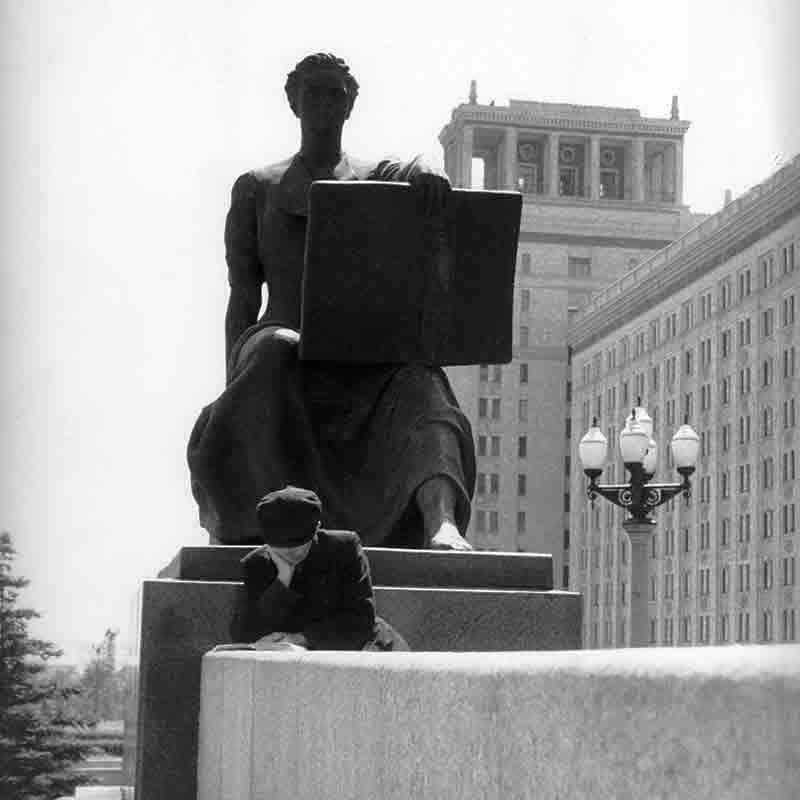 The year 1956 was an important and significant episode of the last century. It was a turning point, a fateful year for many countries of Eastern Europe in addition to all other world political events, such as the Suez crisis. It was also the year in which the last German war returnees returned from Russian captivity. 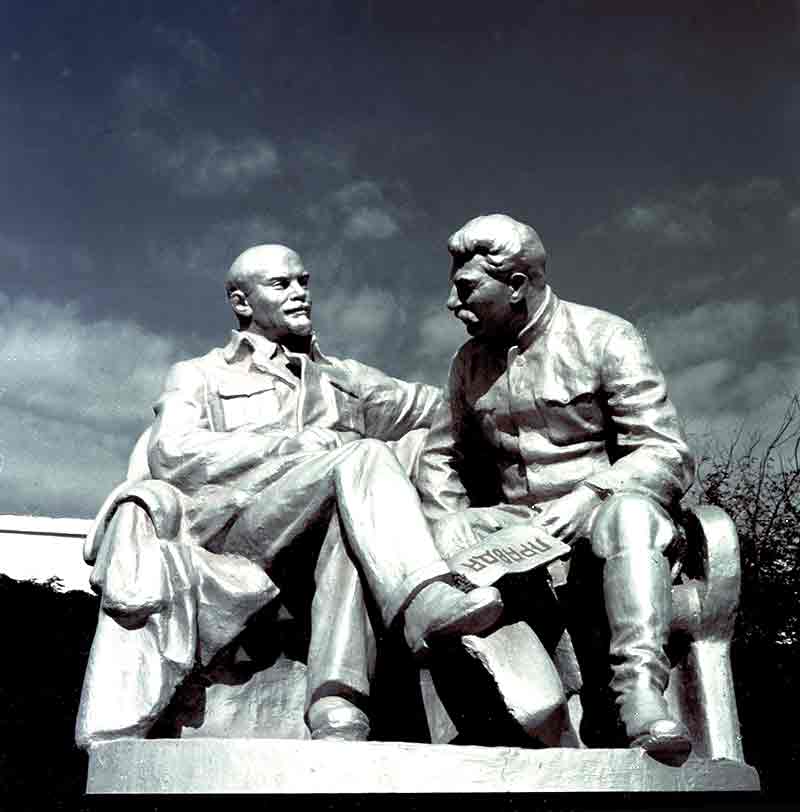 Until Stalin's death on March 5th 1953, the possibilities of finding authentic information about the then Soviet Union was very limited. The West relied on assessments from sparse newspaper reports or on statements in party speeches. 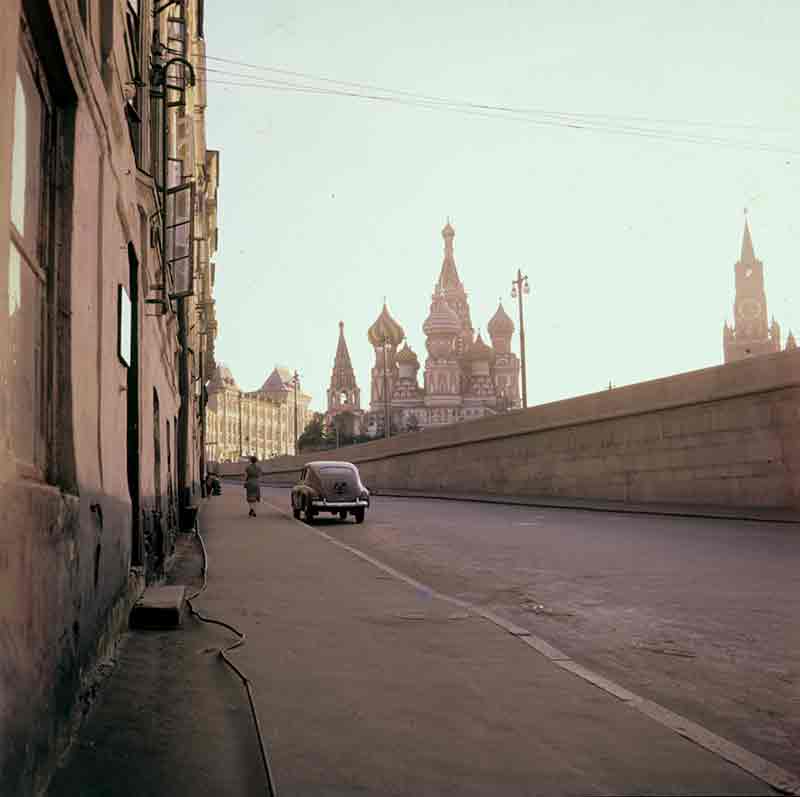 Bordering the Red Square is Moscow's historic district known as Kitai Gorod, with its twisting and winding streets, is the oldest section of Moscow outside the Kremlin. The literal translation of Kitai Gorod is "Chinatown," but there has never been a Chinese settlement here. 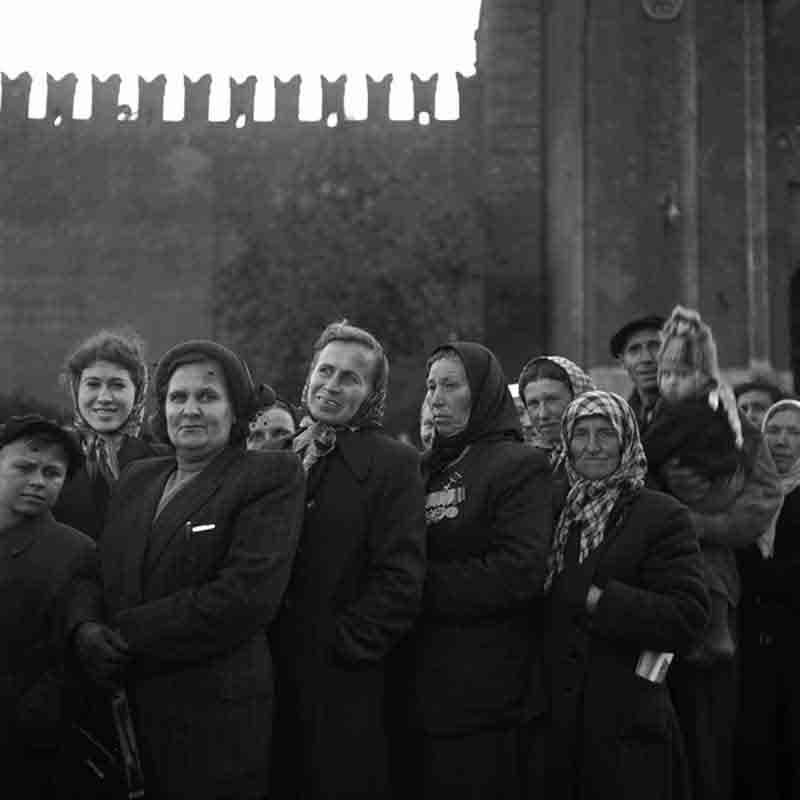 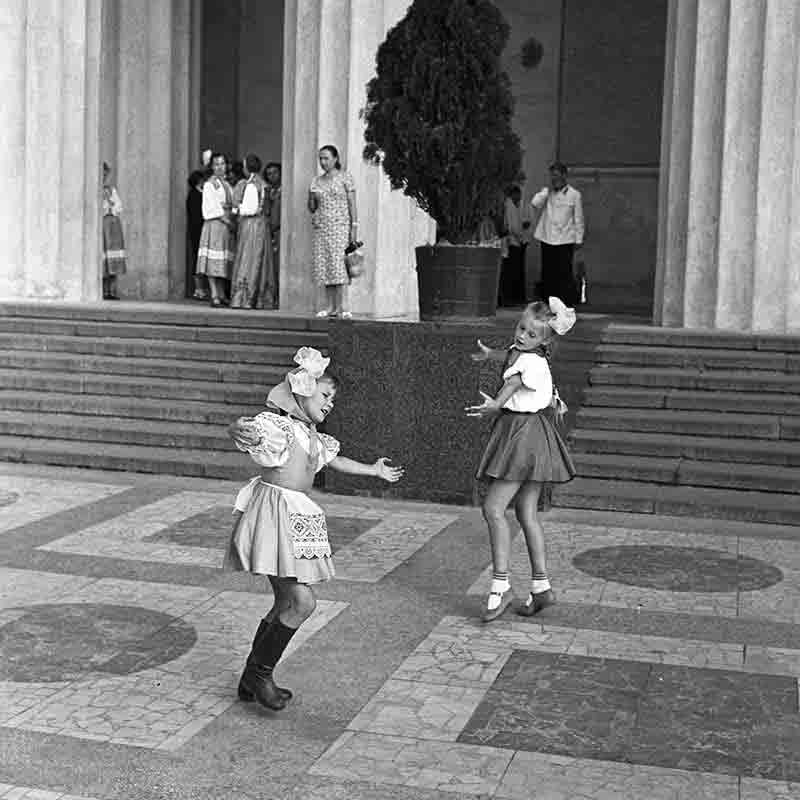 The Soviets, who came up for all the expenses of the four western camera groups in the USSR, were granted an extensive veto, control and participation rights. All of the material had to be "tuned" with the Soviets. 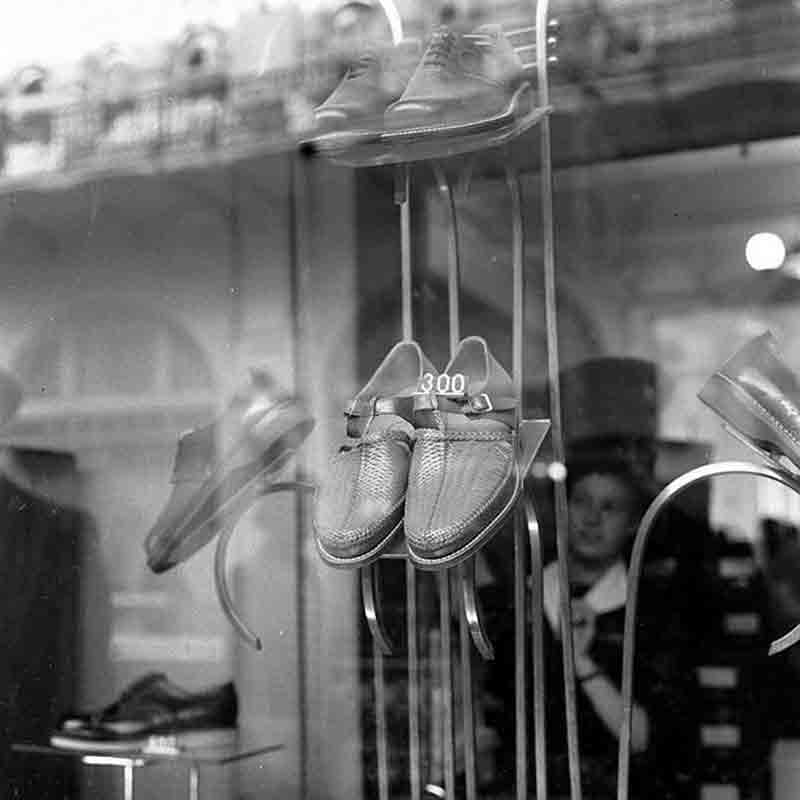 Is the inadequate footwear of the mausoleum visitors of the Red Square in Moscow suitable for conveying an objective or a false impression of the state of the Russian shoe industry? On the basis of the Lenin quotation, that an objective behavior includes the duty to accept the criticism of the other side, the German film people tried to persuade their Soviet opponents. The Russian Censors defended themselfes with yet another Lenin quotations: "Objectivity is what promotes friendship between peoples." 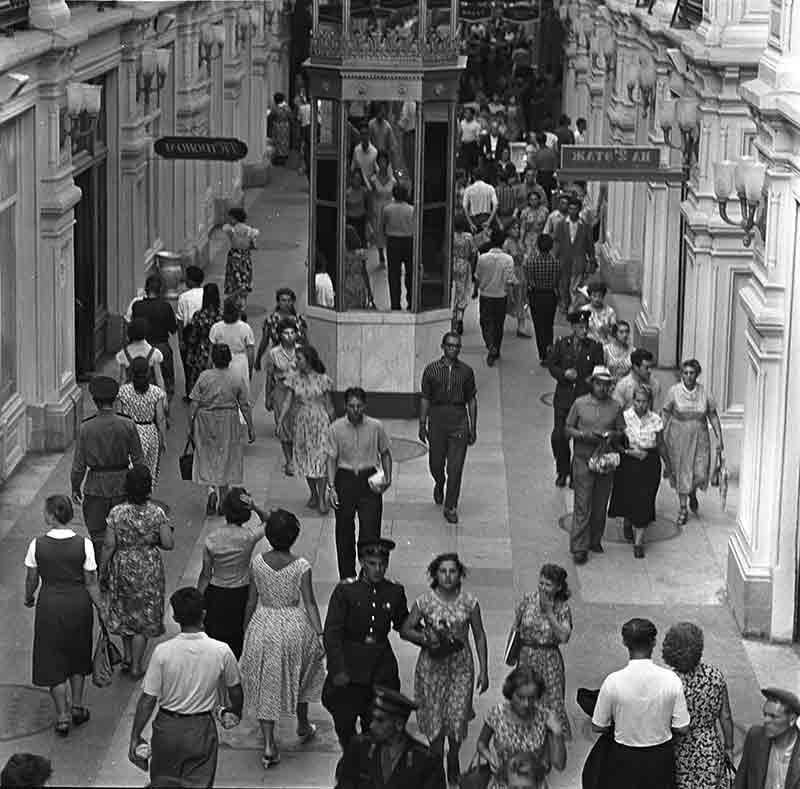 The GUM department store in Moscow in 1956 was a luxury for privileged Russians. The beautiful building is located directly on the Red Square of the Russian capital. It houses numerous stores and is one of the most famous and well-known buildings in Russia. Together with the Red Square and the Kremlin it is part of the UNESCO World Heritage. 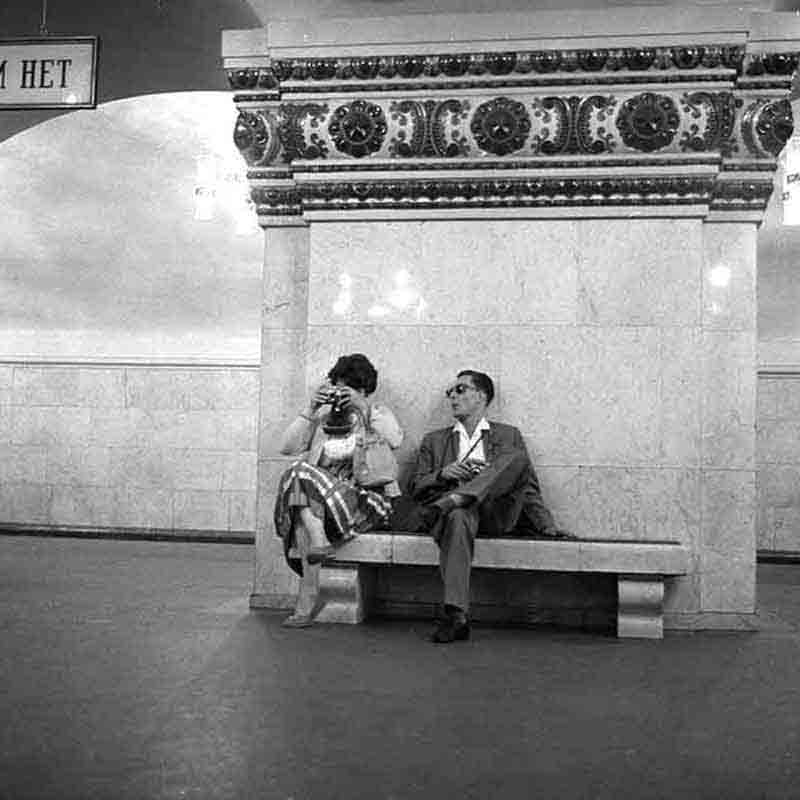 The Moscow metro is one of the most beautiful and deepest metros in the world. The metro stations in Moscow are located so low to protect them from possible nuclear attacks. Many stations were elaborately decorated with marble, sculptures and murals. The term "underground cathedrals" is particularly appropriate for the stations from the Stalin era. Komsomolskaya is considered to be one of the most beautiful metro stations in the world. 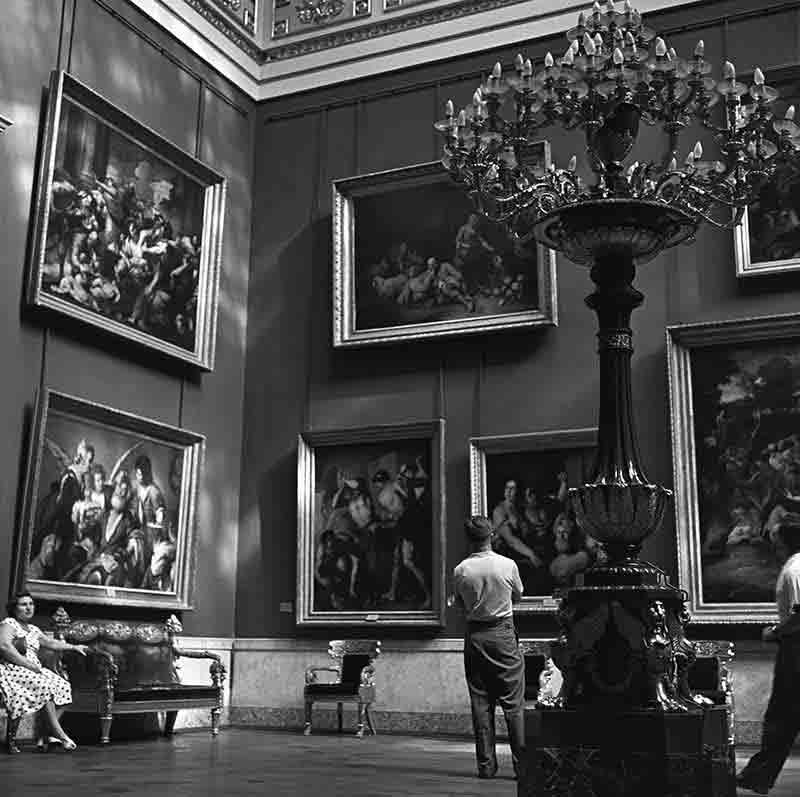 The film was to be completed with production assistance from the Russians in the Moscow Central Studio for Documentary Film, including music, photographs and text recordings. Section three of the contract provided: "Theme of the film is the objective reporting of the USSR, the work of the Soviet people, their everyday lives, their art, recreation and other aspects of social and cultural life." 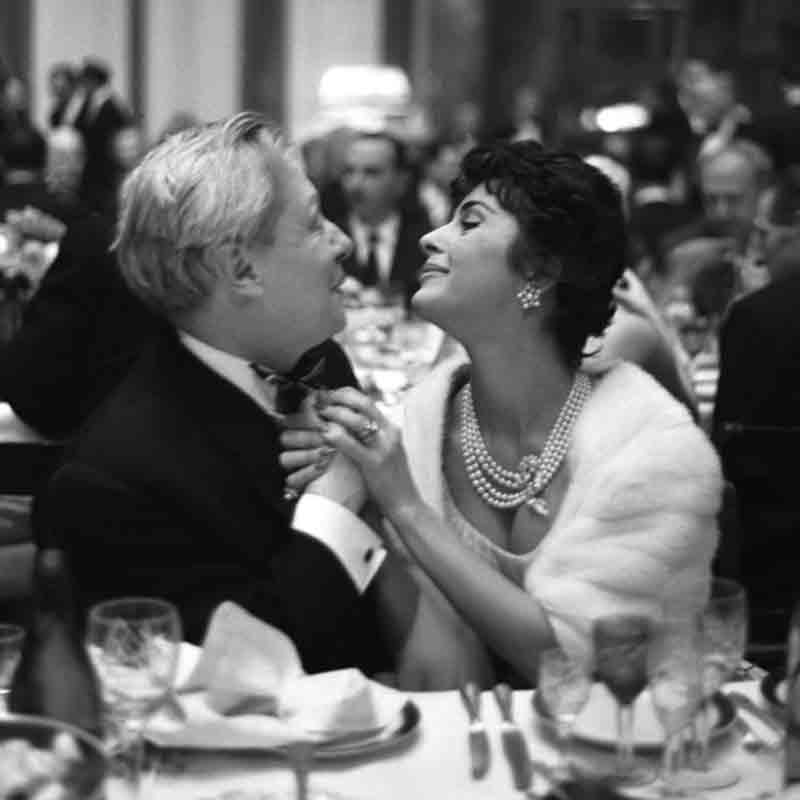 Bock-Schroeder's photographs show the differences and similarities between lifestyles in the east and the west of the late 1950's. 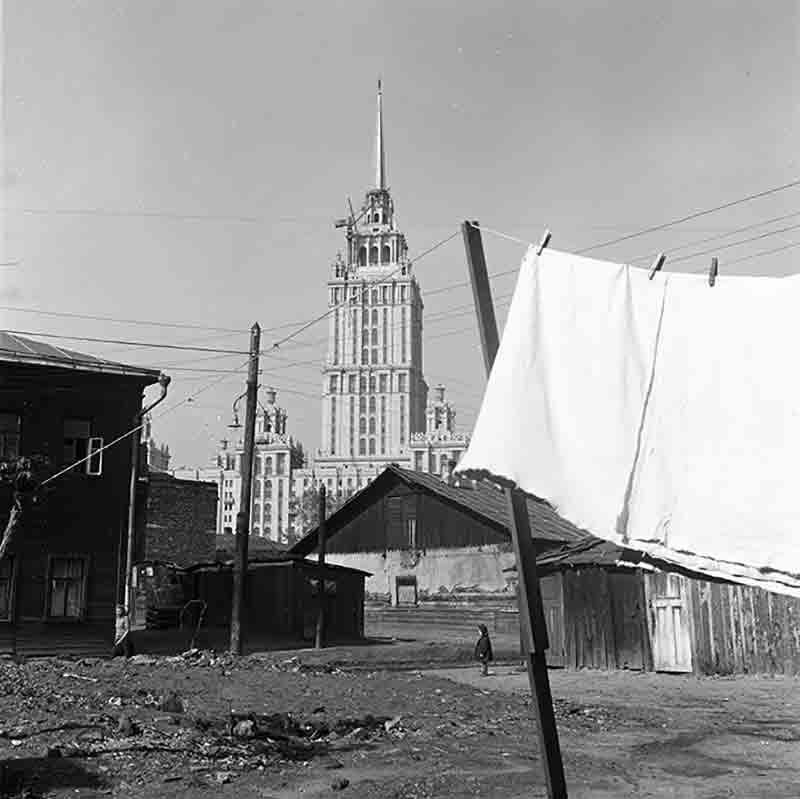 While filming a Moscow backyards, one Russian film official addressed the Film Team with a glossy paper picture book of Hamburg, which he had brought with him: "There are no backyards here either, so why do you want to film backyards in the Soviet Union? This kind of realistic reporting is an insult to the Soviet people" 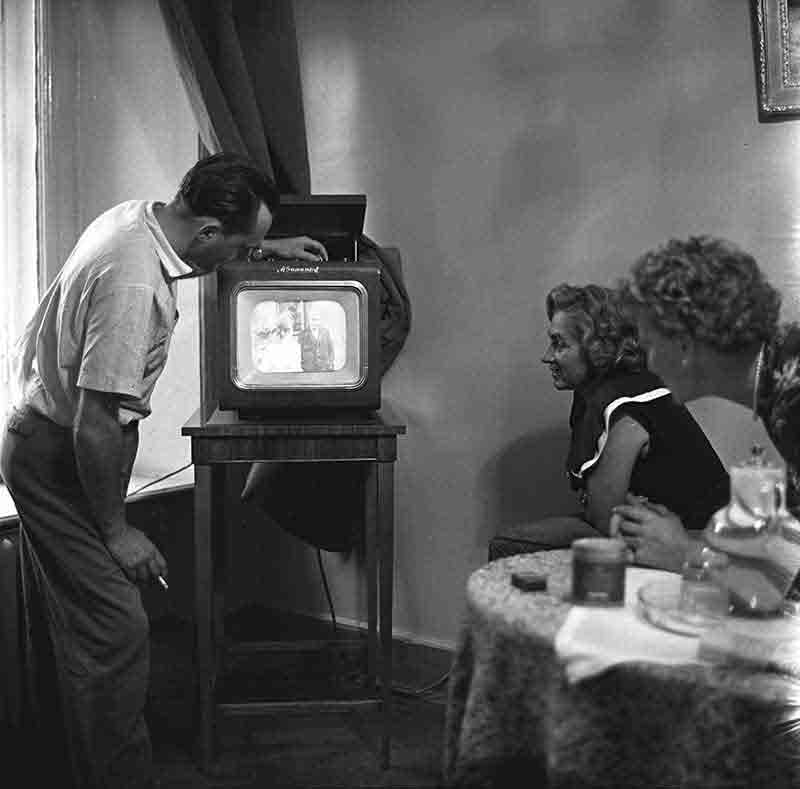 The Moscow Authorities resisted all attempts to an improvised visit to any apartment. Instead, after weeks of effort, the Central Studio arranged the filming permit for the apartment of a Moscow architect, which stood out so advantageously from the standard homes that the DCF people termed it "Potemkin apartment".

In spite of the close supervision Peter Bock-Schroeder managed to avoid censorship most of the time. The silent click of his Rolleiflex twin lens camera helped him to work almost unnoticed from the authorities. On the eve of his departure to West Berlin, Bock-Schroeder sewed most of the exposed rolls of film into his trench coat and brought his work out of Russia into West-Berlin.

Bock-Schroeder's work describes the Russian daily life in all its austerity and authenticity. He witnessed solemn religious services and processions of the Orthodox Church, photographed the Bolshoi Theater in Moscow and took part in sport events and mammoth military parades.

His journey took him through the huge space of the former Soviet republics - from the oriental south to the far north, from western Russia to the Siberian east. He photographed people, the big cities, the historic buildings and gigantic construction sites.

Peter Bock-Schroeder was amazed by Russia and the Russians. He admired their culture, their friendly nature and their hospitality. And there was a longing to find his own roots. Bock-Schroeder's father, who he had never met was Russian.

Photographic records reach their full significance in historical moments. “THE SOVIETS” has become one of Bock-Schroeder’s most important and poignant reportages.