The ideological roots of socialist realism lie in Marxism-Leninism and its basic idea of class society. Against this background, the art of socialist realism in the Soviet Union initially emerged from a revolutionary consciousness, before it was gradually transformed more and more into propagandistic state art. 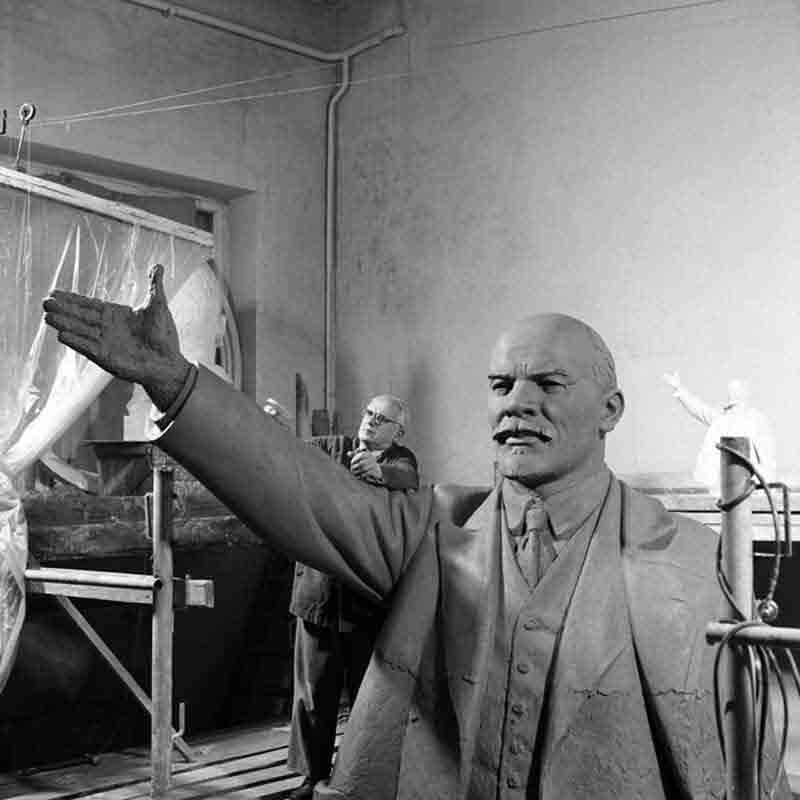 Already from 1917, in the face of the First World War and the October Revolution, the social and socialist awakening in particular belonged to the preferred range of themes in the arts. Characteristic of this early phase was a pluralism of styles in which abstract and representational art movements were given equal status. 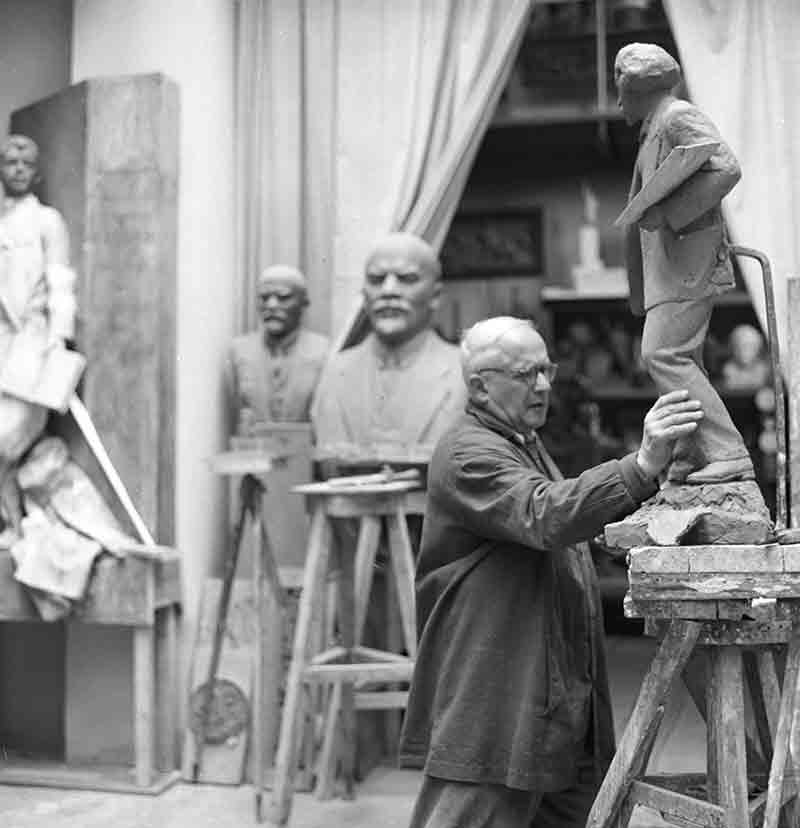 Matvey Manizer was born March 5th 1891 in St. Petersburg, into the family of the famous artist Henry Manizer. As a student he attended the Saint Petersburg Stieglitz State Academy of Art and Design, and from 1911 through 1916 the art school of the Peredvizhniki.

Established in 1870, The Society for Itinerant Art Exhibitions, commonly known as Peredvizhniki - meaning "Itinerants" or "Wanderers" - believed in representing subject-matter drawn from everyday life, with an accuracy and empathy which reflected their egalitarian social and political views.

Artists wanted to serve the construction of a new society. Socialist Realism was not simply the art of a dictatorship, long before Stalin and his art dictate, there were precursors of a realistic art in the 19th century, which aimed to represent workers with dignity.

The Futurists sounded the alarm in 1928. They feared the loss of pluralism and artistic freedom. Nevertheless, Socialist Realism is not compatible with the art of the Third Reich. The art of the Soviet Union also contained modern elements. 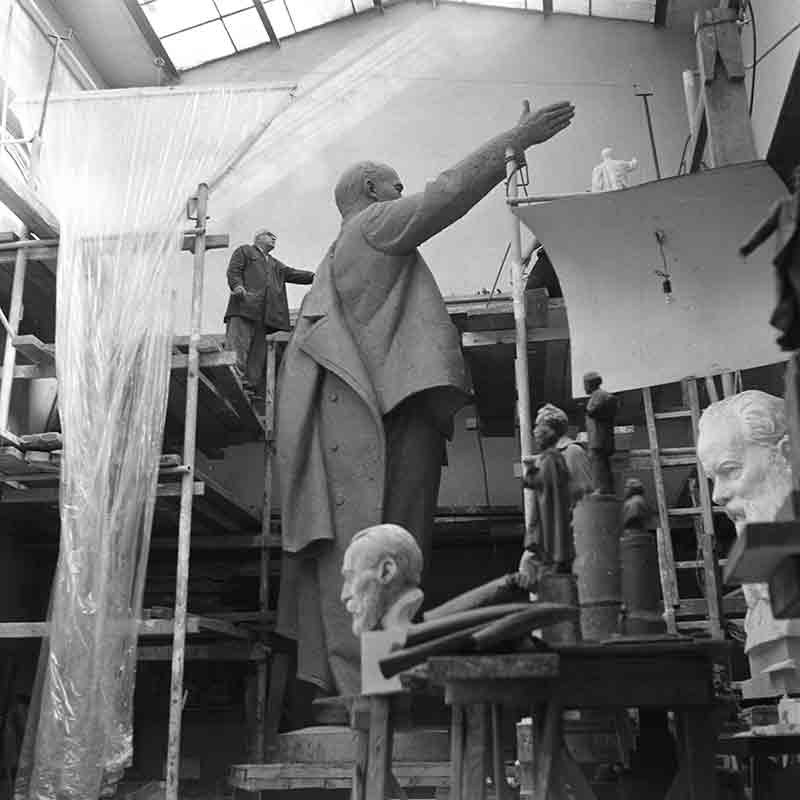 In 1932, under Josef Stalin, the Central Committee of the CPSU declared socialist realism to be the valid and binding aesthetic of the Soviet Union, which was to last until the collapse of the USSR.

A "reorientation of the fine arts towards political agitation and propaganda" was demanded by the author N. Malenikov in 1931 in his report on a traveling exhibition of the art sector of the People's Commissariat of Education. The party dictate of Socialist Realism replaced the diversity of avant-garde art. Paintings titled "Building a Factory" or "Life is Getting Better" were now created according to Stalin's art dictate.

The pluralism of the arts, which had existed immediately after the October Revolution in Lenin's time, was history. 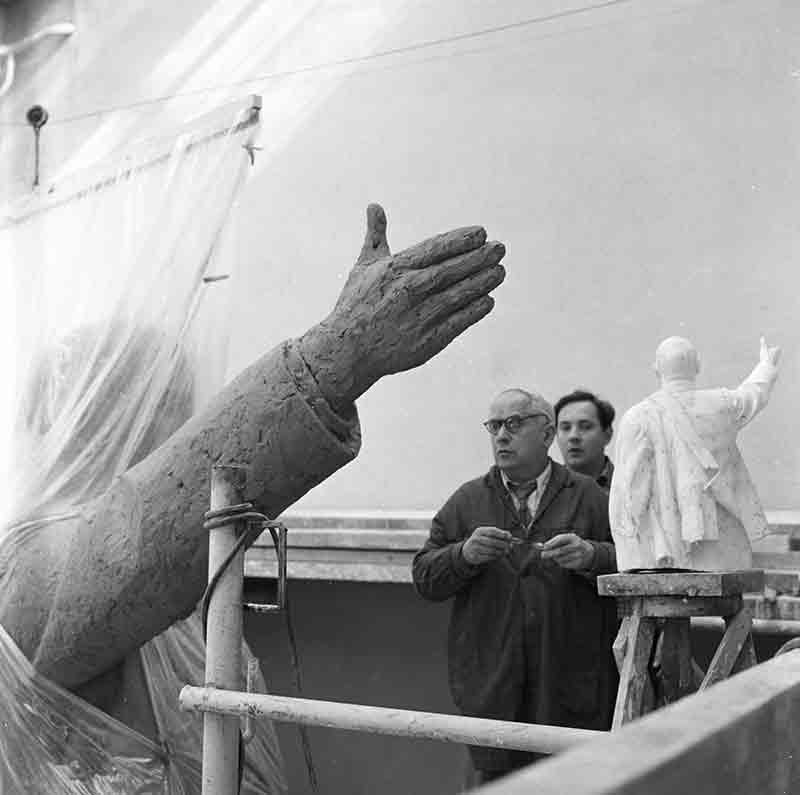 From then on, the only accepted art form had to primarily reflecte in realistic, populist and easily understandable propaganda, its pictorial language had to be committed to the three fundamental premises of quality, truth and partiality. These principles also had an effect on the formation of statecraft in the GDR and China, among others. 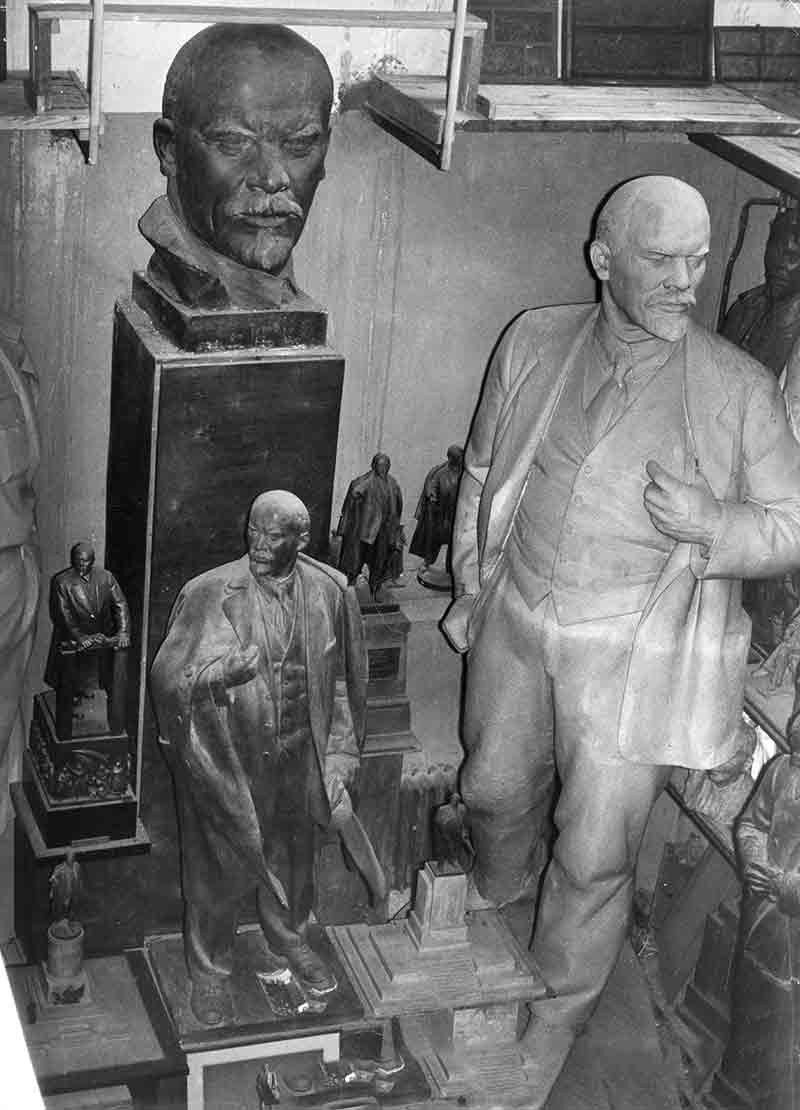 In 1941 Manizer moved to Moscow. Working in an academic and realistic style, Manizer produced a great number of monuments situated throughout the Soviet Union, including some twelve portrayals of Lenin. During the Great Patriotic War, in 1943 he donated the awarded Stalin Prize (the sum of 100 000 rubles) to the defense Fund. 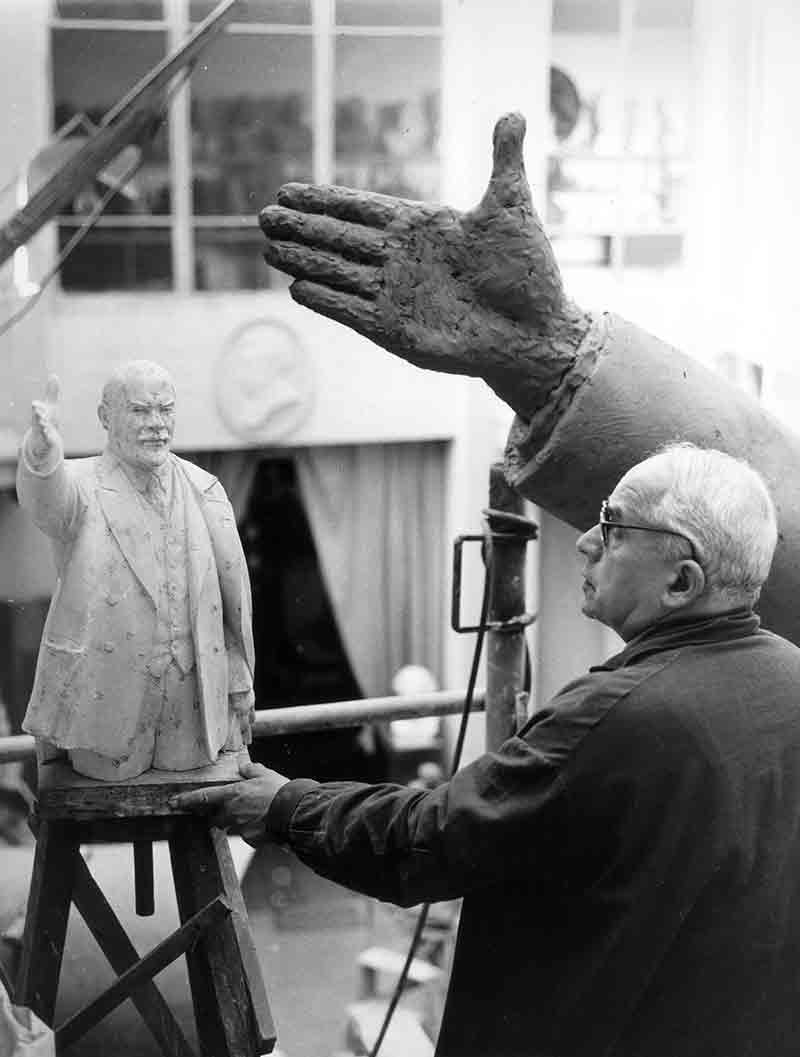 His artistic career is marked by the projects of monuments, many of which were carried out in different cities of the country. 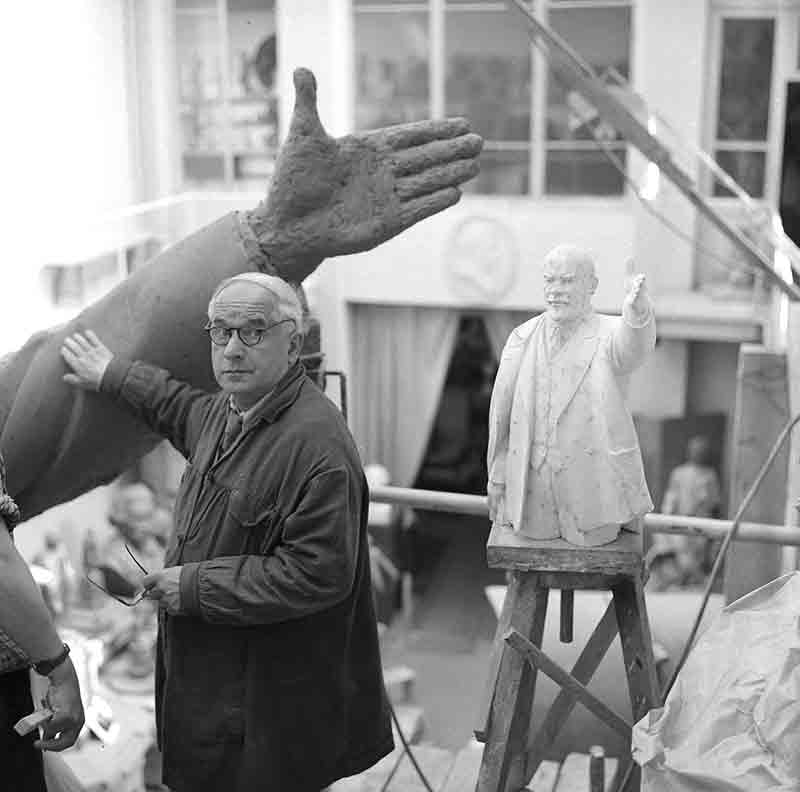 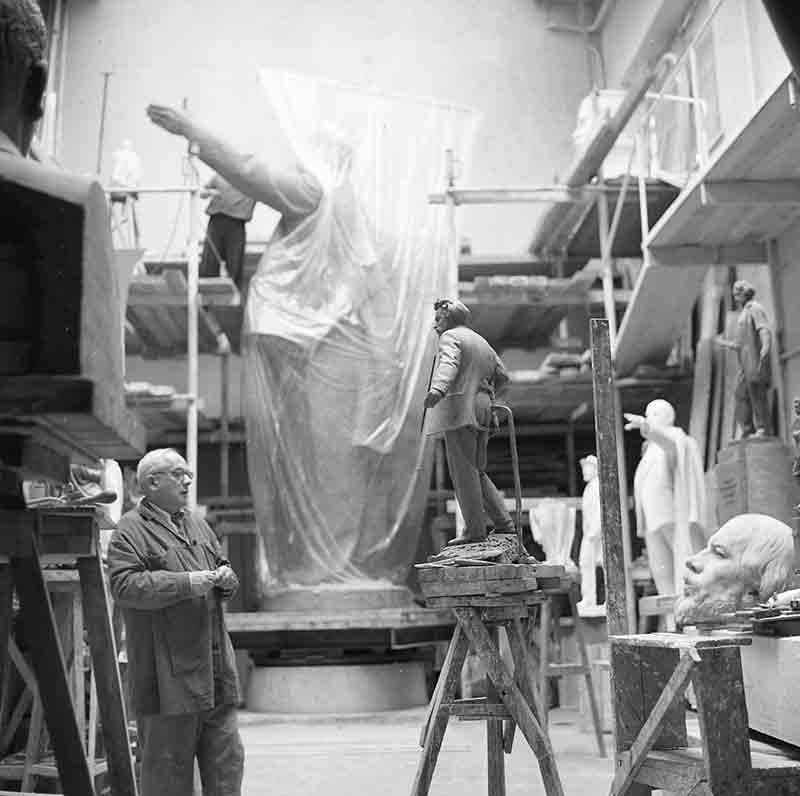 For many years, since 1921, Manizer engaged in teaching at the Art Institute of Petrograd - Leningrad and Moscow. in 1953 he was the author of Stalin’s bronze death masks. In 1966 he became vice-president of the USSR Academy of Arts. 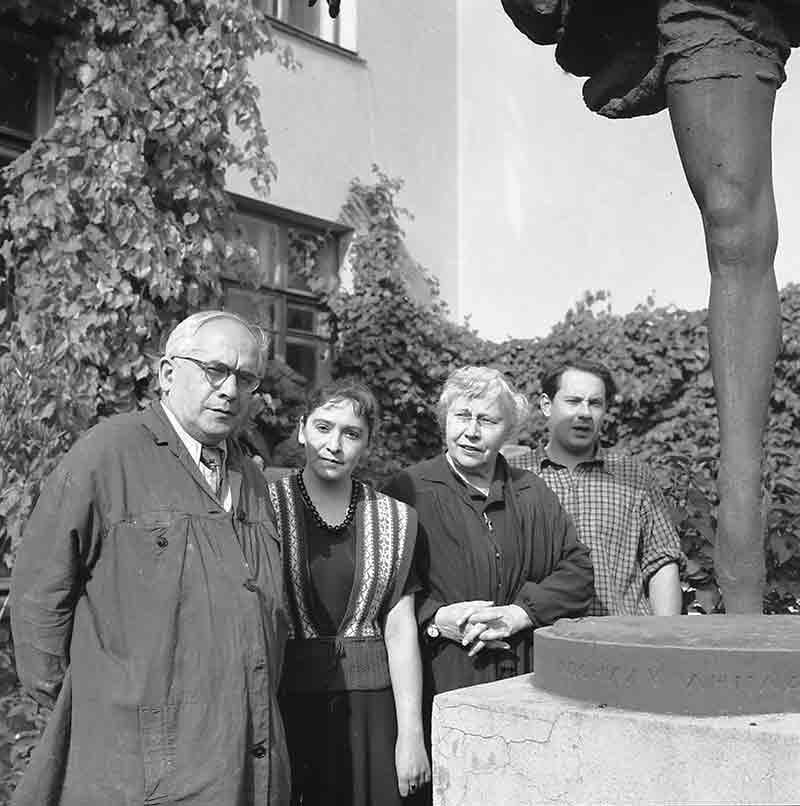 Manizer's wife Elena Alexandrovna Yanson-Manizer (1890-1971) was a sculptor in her own right, with work at the Dynamo station of the Moscow Metro. Their son Hugh Matveyevich Manizer (born 1927) is a noted painter. Among Manizer's students was the Stalin Prize-winning Fuad Abdurakhmanov. 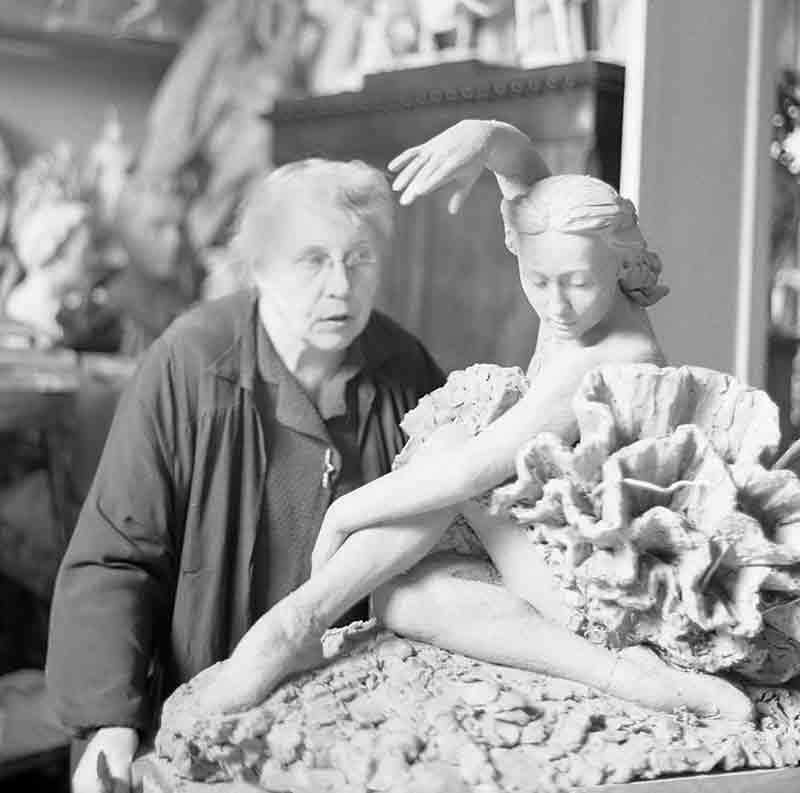 Elena Janson-Manizer or Yanson-Maniser was the 20th century's leading sculptor of the Soviet ballet. Her beautiful statues of sportsman and ballet dancers can be seen today in the public gardens of Moscow and St Petersburg and in the stations of the Moscow Metro. 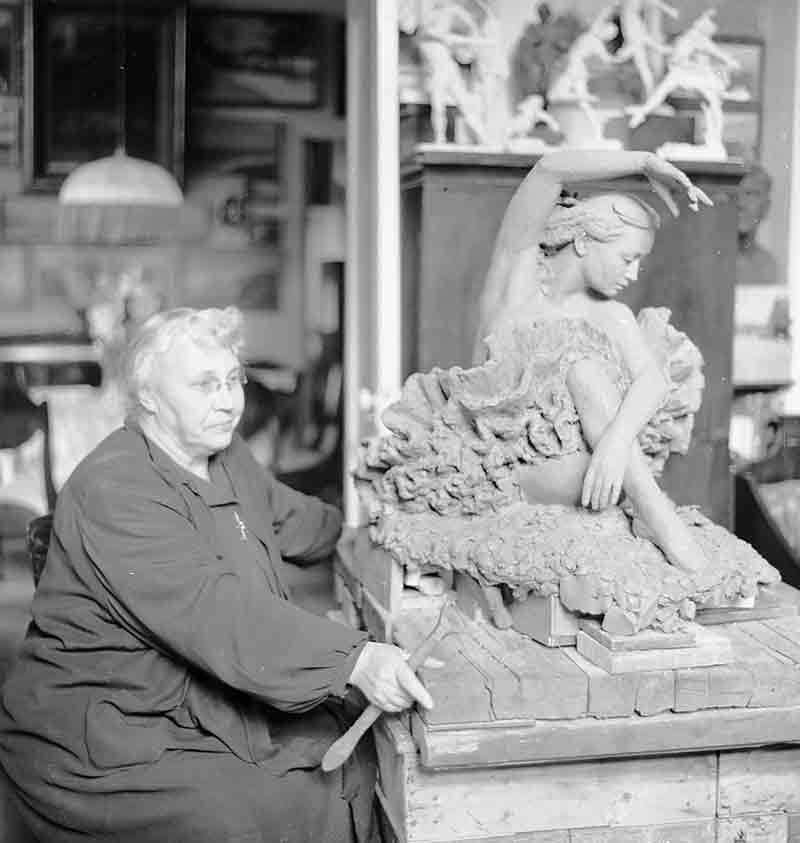 Jansen-Manizer loved the ballet and sculpted most of the leading dancers of the mid 20th century. Being a fervent admirer and subtle connoisseur of ballet, Jansen-Manizer suceeded in portraying the individuality of each dancer as well as their grace and athleticism. 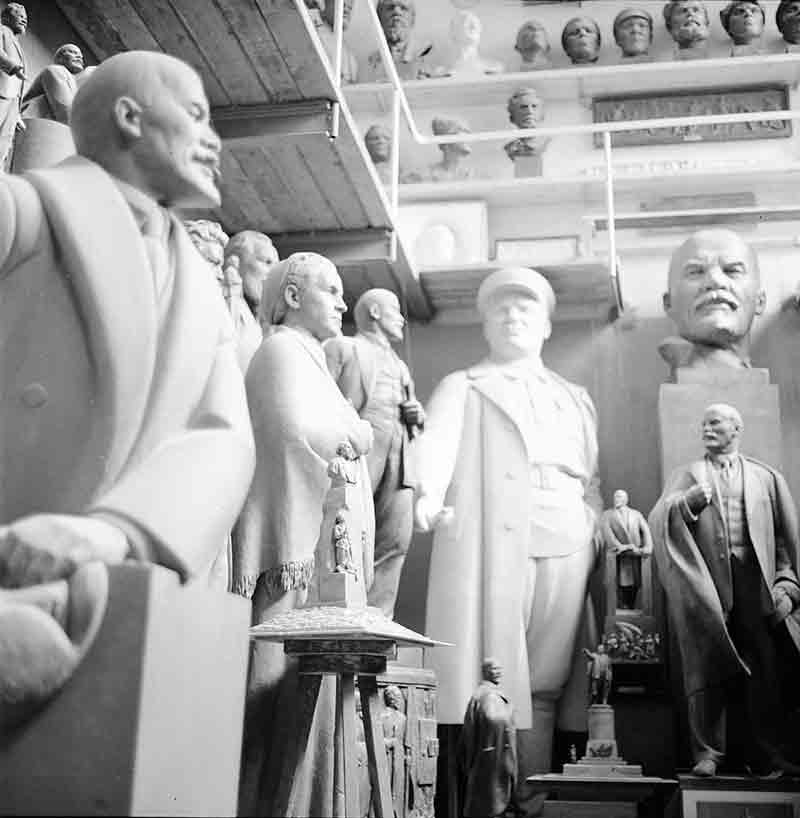 Manizer's works are well known to millions of people visiting Moscow. Frontier guard with a dog, woman with chicken, a young worker with a gear wheel, a revolutionary sailor, and dozens of other sculptures decorate the most famous Metro station “Revolution Square”. He died in 1966 and is buried in the Novodevichy Cemetery of Moscow.